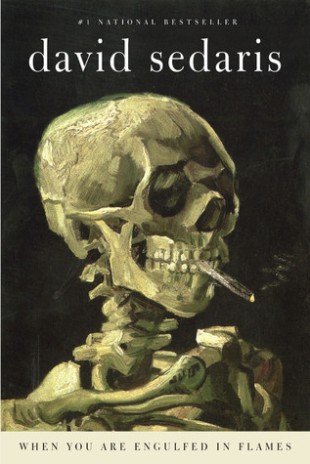 When You Are Engulfed in Flames is the sixth book by David Sedaris originally published in 2008. I was drawn to read more of his work after reading Squirrel Seeks Chipmunk earlier this year. While there were many others to choose from, this cover depicting a Van Gogh painting of a skeleton smoking a cigarette and the eye-catching title made this book hard to resist. It collects anecdotal essays about a range of situations: a talkative cab driver turning the conversation far too sexual, the experience of buying your partner a human skeleton, and spending a week with a miserable and slothful babysitter.

Before having read any of it the title evoked a familiar hyperbole to me: extreme expression or feeling you get when faced with something woefully uncomfortable. Not anything too serious, but the kind of exasperation that comes with being caught in an awkward or unusual situation. As it turns out, this feeling was fairly spot on. Sedaris’ essays tell amusing and elaborate anecdotes about situations just like these. Every little detail is given focus, including his state of mind in the moment, where he’s at in life, and relevant information from his history.

Beginning the collection was a little jarring. It doesn’t really ease you into the perspective; I didn’t realize right away that it was supposed to be him. It takes a few anecdotes before you come to understand the nature of his perspective better. Though I expect some details are embellished, the stories in his essays are quite raw, full of feeling and often rather unflattering to his character as much as the other people who populate each essay. Situations are often quite petty with people acting obnoxiously in ways that feel uncomfortably real, serving to add to the humour as he narrates events with a sharp frankness. We bear witness to some of the worst examples of behaviour and attitudes humanity has to offer, yet it all feels prevailingly human, rather than more manufactured antagonism.

Reading this book is not an exercise in misanthrope, however. While witty and even hilarious, these essays are strong because of the introspection they inspire in the reader. The fallibility of the narrator, relentlessly transparent in showing his vanity and frequently judgmental attitude, reflects back at the reader in a substantial way. It challenges us to think about our own feelings and how we ourselves respond to what we’re reading, as much as we learn his own feelings.

We are drawn in by the humorous approach, coming to accept realities of the story as he presents them, until he shifts perspective in the slightest ways to showcase the more complex dimensions that situations like these really have, in a way that is much more true to life. It was so easy to judge these dubious people along with him, until the shift happens and we are left to brood on our feelings and prejudices.

Some essays are stronger than others, as one might expect dealing with a collection, but all have value. Some have particularly more impact or deal with a heavier topic than others. These weightier essays leave a lasting impression that is well balanced by the lighter stories, so a poignant conclusion may leave you feeling more somber, but the book doesn’t leave you in that place for long.

When You Are Engulfed in Flames is a book that will make you laugh, might make you cry, and will certainly leave you thoughtful. I personally enjoyed reading it a couple of essays at a time, but more prolonged sessions didn’t feel like a chore in the way that other collections have to me. It presents some of the worst of human nature at its pettiest or judgemental, but in a way that is surprisingly optimistic and profoundly real. It is a treasure trove of thoughtful, uncomfortable anecdotes and I highly recommend it.