Hermann Kermit Warm is going to die. The enigmatic and powerful man known only as the Commodore has ordered it, and his henchmen, Eli and Charlie Sisters, will make sure of it. Though Eli doesn’t share his brother’s appetite for whiskey and killing, he’s never known anything else. But their prey isn’t an easy mark, and on the road from Oregon City to Warm’s gold-mining claim outside Sacramento, Eli begins to question what he does for a living – and whom he does it for. 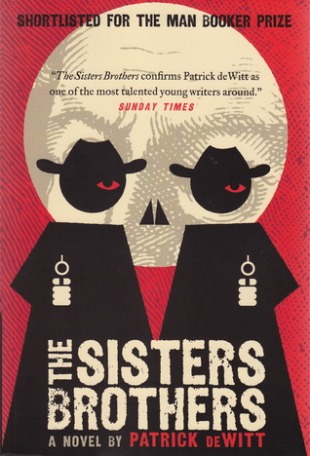 The Sisters Brothers is a novel that quite surprised me. It demonstrated that Patrick deWitt has a substantial versatility to his writing style. This novel is the first of his I ever acquired, but the last one I have read. The book and deWitt as its author were cemented in my memory thanks to the wordplay of the title and the fantastic cover art by Dan Stiles, leading me to read his first book Ablutions and his latest book Undermajordomo Minor before finally getting to this one. Having last read the latter of the two I expected The Sisters Brothers to be written with similar quirk and colour, but the difference in tone was dramatic.

This novel is an homage to the classic Western genre, but this feels more to me like it flavours the story rather than defines it through and through. There are standoffs, robberies, and drunken debauchery, but its all told in a more grounded, harsh way. This is especially the case when characters find themselves confronted with illness or injury, as well as the destructive effects of the frontier and the gold rush on people and the environment. It’s a historical novel, dressed in the trappings of a Western. Nevertheless, the brothers do embark on a strange odyssey to California, encountering many fortunes, ailments, oddities, and adversaries along the way, including a brief brush with the occult.

The story is told from the first-person perspective of Eli Sisters, the younger of the two brothers. Though of the two he is the one tired with the lifestyle and vocation of a paid killer, deWitt does a good job of balancing perspectives. It’s easy to see Eli as the more sympathetic at first, since Charlie legitimately enjoys the life of a rogue, but it quickly becomes apparent that he’s got his own issues, which perhaps cast Charlie as worse than he is thanks to Eli’s narration. Eli can be naively sentimental at times, for instance, often over-eagerly, making Charlie’s more pragmatic views seem cold at first. He also frequently hurts Eli’s feelings, and while he is quite a heel sometimes, it’s apparent to me Charlie cares for him despite the friction that often arises between them. Their relationship is complex in all the ways you would expect close brothers to be; sometimes a little exploitative or inconsiderate, but still caring and looking out for one another.

The only real complaint I have about the story is I wish at some point the stakes felt a little higher than they ever do. Eli narrates in the past tense, and while that isn’t inherently a problem, there are a few times where he tips his hand a little in terms of their fate after the story has concluded. I understand the story is about much more than these two gunman taking down a mark, but I’d rather not have been given a vague yet clear hint as to their fate, before the actual conclusion takes place. Even as they reach their destination and circumstances have them changing their plans, the story doesn’t reach any sort of crescendo that I was hoping for.

The Sisters Brothers is a great book, issues or not, and I’m happy I read it. It’s very poignant and compelling tale of violence, brotherhood, and the strange bonds hold people together. It doesn’t get too caught up in its grimmer and gritty aspects of the frontier to stop some levity and colour from entering the story as well, even if these aspects are still a little dark. It’s compelling from beginning to end, even without the mounting tension I would have hoped for. Whether you’re a fan of Westerns or not, definitely check it out.

2 thoughts on “Book Review – The Sisters Brothers by Patrick deWitt”