525 B.C. The Persian King Cambyses sent fifty thousand soldiers across the conquered Egyptian desert to take an oasis city not far from where the Libyan border stands today. According to Greek history, a hurricane-force sandstorm struck near the end of their six-hundred-mile trek. The army—all fifty thousand men—vanished without a trace.

1986 A.D. A British archaeological team, sent to the edge of the Great Sand Sea to exhume evidence of the incident, has gone missing. The Bureau for Paranormal Research and Defense is sending the world’s greatest paranormal investigator, Hellboy, to find the missing team and discover what became of The Lost Army. 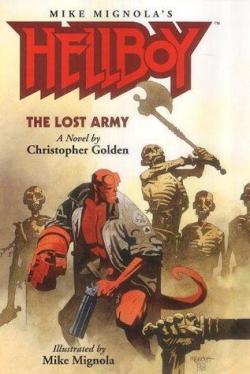 The Lost Army by Christopher Golden is the first Hellboy novel, based on the comic book series of the same name. The book includes illustrations by series creator Mike Mignola. While I’ve enjoyed prose Hellboy stories from a couple of anthologies by now, this was my first venture into a full novel about the character. Since this was published in 1997 there have been nine other Hellboy novels and four anthologies. Interestingly, only a handful of this material is considered to be in continuity with the comic book series proper, which understandably takes precedent. This novel, along with other books and stories by Golden, are considered within canon.

Knowing that that character’s primary story arc takes place within the comic book series, it was easy to deduce that this book would be similar to the short stories I’ve already read. Namely, that this would be a self-contained story following Hellboy on another one of his adventures investigating the paranormal. I really like this as an idea, as it reminds me of the type of pulpy novels and stories that influenced Mignola in the first place. It helps make these books feel like less of a commitment too. I intend to eventually read them all, but it’s not a continuous series that I might feel bad for setting aside for longer periods.

In my review of the anthology Odd Jobs I mentioned that I went in expecting the stories to be a fun novelty but nothing remarkable. While I was fortunately impressed with how that collection turned out, this novel fit those expectations far more closely. The mystery and paranormal aspects within are bog standard, especially as someone who has read a lot of the series already. An ancient evil wants to break through the veil into our realm, a less ancient sorcerer wants to use Hellboy to facilitate that. There’s an undead army, tentacle monsters, and strange inhuman beings. These aspects weren’t uninteresting, but weren’t framed in a way that made them particularly interesting either. There were a few stand-out moments though, including a man turning into a giant spider while the group is trapped on the web of another. I liked how Golden imagined this particular idea because the webs are so sticky and strong—as they’d need to be to successfully trap people—that trying to simply rip the webs off will tear your skin. This definitely made for one of the better horror sequences in the novel.

A significant factor introduced in this story is Hellboy’s love life, which is something largely absent from the series proper. Here we learn he once had a relationship with an archaeologist named Dr. Anastasia Bransfield, who has called him to the site of her current expedition in the Sahara Desert as a favour. While it was a little interesting to see a facet of Hellboy’s life that I haven’t before now, the writing around it was not all that great. General concern for one another and small acts of intimacy were apparent, but there was mostly a lot of narration hammering home that each is someone the other cares about very much. I was told about their history and feelings a lot more than I was actually shown how they feel toward one another. At the onset their relationship is a thing of the past and by the end that is where it remains, without any real hiccups along the way.

This is the unfortunate case with all of the interpersonal relationships in the story; they pretty much stay in the same place, unless one of the characters dies. I was disappointed further with the use of an MI5 agent named Creaghan, who butts heads with Anastasia over control of the expedition and is disdainful of Hellboy for not being human. While Hellboy, Anastasia, and others probe the subterranean source of all the horrors, Creaghan plays a fairly big role as he is left on the surface to deal with the titular lost army. Despite being featured so much, by the end he unceremoniously departs. No debriefing with the others once the dust settles, nor any olive branches recognizing a job well done. It isn’t often that I see characters intolerant of Hellboy’s presence as a point of note in a story. I wish Golden had explored it a little more.

Another character, Arun Lahiri, has feelings for Dr. Bransfield and cannot help being disgusted when he finds out about her past history with Hellboy. After finding an unusual amulet these feelings are driven to the point of crazed lust and violence urges. These moments were a little heavy-handed on their own, but what made matters worse was this conflict never comes to a head in a way that meaningfully addresses the tension between the characters. All of these moments had the potential to add a lot more depth to the story, and certainly seem set up that way, but never delivered on anything by the end.

Despite my disappointments, The Lost Army is not a bad novel. In a lot of ways it’s exactly what I was looking for; something fun and easy to get through in a relatively short amount of time. A reprieve from denser reading material. I’m not sure it was meant to be anything more than pulpy fun, and as a novel that could only really be a side-story it’s not a bad first outing either. The character had only debuted about four years before this novel, yet this material still feels consistent with the character even after everything that has come afterwards. I’d recommend it more to existing fans, but there is enough context introduced at the beginning of the novel that a curious reader could easily start here too to dip their toe in the water and see how they like the character. It’s a fun adventure into paranormal mystery and pulpy horror, with some great illustrations supplementing it all. Just don’t expect a lot of character development.

3 thoughts on “Book Review – The Lost Army by Christopher Golden”