This past month of book shopping has been a little heavier than April thanks to a trip to Toronto, which has used bookstores aplenty. The only disappointing thing was I didn’t find any of the books I was specifically looking for, but there were some good finds and impulse buys nonetheless. I had a harder time remembering all that I purchased before I got started writing this, funnily enough, because most of these I picked up before the 15th, so I haven’t actually purchased any physical books in a few weeks.

In terms of personal writing (instead of putting out another full report) I hit a bit of a block with revising my short horror story. I’ve made some fixes here and there, but there’s a section I want to alter that I’m not sure how to rework into the story to make it less tangential. As a result I’m not sure I can meet some submission deadlines I’ve been keeping in mind. 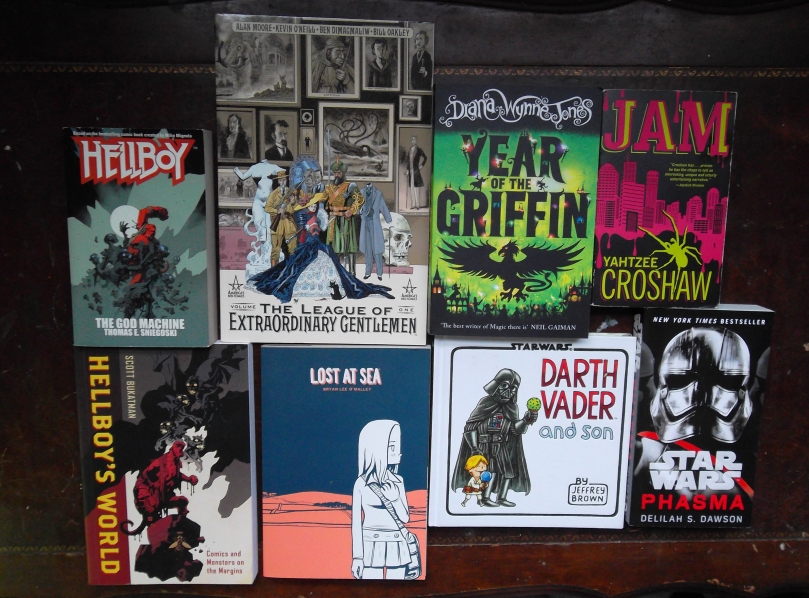 That’s right, more Hellboy books. The God Machine is one I’ve actually been awaiting for quite a while though. I ordered it back in March when I found a good price for it used online, but it took a long time getting to me for some reason. For a while I had resigned to buying it as an ebook, since the publisher isn’t producing any more physical copies, so I’m happy this worked out so well. Hellboy’s World caught my eye because it is more of a study of the series as a work of art and literature.

Year of the Griffin by Diana Wynne Jones is the sequel to The Dark Lord of Derkholm, which was featured in one of these blog posts back in March. The same as with the first novel, I picked this up because I happened to notice it was available brand new; oftentimes I find it is sold out or on back order.

Jam was definitely an impulse purchase. I was a fan of Yahtzee Croshaw’s video game reviews years ago and at the time I was curious about this novel he had put out, but never got around to picking it up. I can still remember his little blurb about it: “It’s about an apocalypse, with jam in it.” I found it used for $3 in Toronto, so I took the inexpensive opportunity.

Lost at Sea was another good second-hand find. I’m a fan of Bryan Lee O’Malley’s work and always meant to pick this up, it has just been out of sight out of mind for a while. I don’t really know what it’s about, but I look forward to reading it anyway.

The first volume of The League of Extraordinary Gentlemen is a book I read years ago in my high school’s library. I never got around to the second volume, however, and since I own neither I decided to pick this one up when I found it used as well.

The last used find was Darth Vader and Son, which I only really picked up because I think it’s cute.

I bought Phasma because it was a few dollars off on Amazon and it was May the 4th (be with you) at the time, so I purchased it as a small token of celebration. I don’t know when I’ll actually get to it, but I’m certainly interested in learning more about the character sometime down the road, once I’ve finished up most of the other books on my Star Wars shelf.

I also picked up a lot of digital comics this past month. Doctor Aphra and the Enormous Profit and Out Among the Stars were both Star Wars books I knew I’d be getting to soon as I’ve been trying to catch up with the series lately. The slew of Venom titles is a result of a sale, which had them going for a few dollars each. When you can get five digital books for less than the price of one of them as a TPB it’s a little hard to resist. 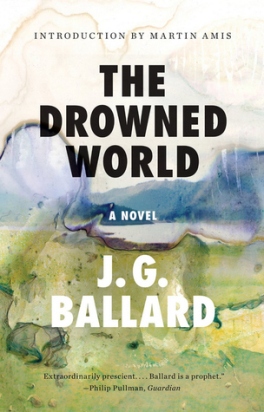 Books in this category have been a little slight this month; there just hasn’t been much of anything new that’s caught my interest.

A Liar’s Autobiography is the only one that wasn’t brought to my attention by a WWW Wednesday post on another blog. I’ve been watching Monty Python’s Flying Circus on Netflix, which reminded me the book existed. It looks like it’ll be a little hard to find for a reasonable price though.

I seem to come across a lot of mysteries and thrillers reading other blogs, but Lying in Wait is one that especially stuck out to me. The cover is strikingly macabre and the summary sounded intriguing and dark enough that I want to check it out.

The Drowned World is an older science fiction novel that I hadn’t heard of before. In the year 2145 London is overrun by a Triassic-era type of jungle thanks to solar radiation and global warming, populating it with giant iguanas and swarms of insects. It sounds silly in the more classical sci-fi sense, which makes it all the more appealing to me.

The Last Hedgehog is an illustrated elegy to the common hedgehog of the English countryside, a species which is currently threatened. It was written to celebrate Hedgehog Awareness Week and help teach people what they can do to protect the species.

Lastly, Vicious only just came to my attention yesterday. Putting it as succinctly as I can, it is about a pair of former friends who develop superpowers in college together and become adversaries. Don’t know how good it actually is, but I am intrigued at any rate.

Well, there we have it for this month. It feels to me that May consisted of a lot of books I likely won’t get to until even later than the usual haul. I know I haven’t really gotten to much of any of them lately, but I think more in spans of the next year or so. I’m usually pretty good about reading new books shortly after I buy them, rather than say The Lord of the Rings, which I’m pretty sure I bought nearly a decade ago yet I’ve only just been reading these past few months. Hopefully none of these collect dust that long.