June has been another rather light month. A few things have caught my eye, which I’ll get in to, but I decided to hold off on the temptation to pick them up. With The Lord of the Rings finally finished I’m wanting to get back into the swing of reading through more books, rather than picking up more new ones.

It’s also been a while since I put out a Writing Report, which I’m going to fix soon. I do have some updates to share, though nothing major. I really need to motivate myself to finish writing my short horror story too, so I can start submitting it places. 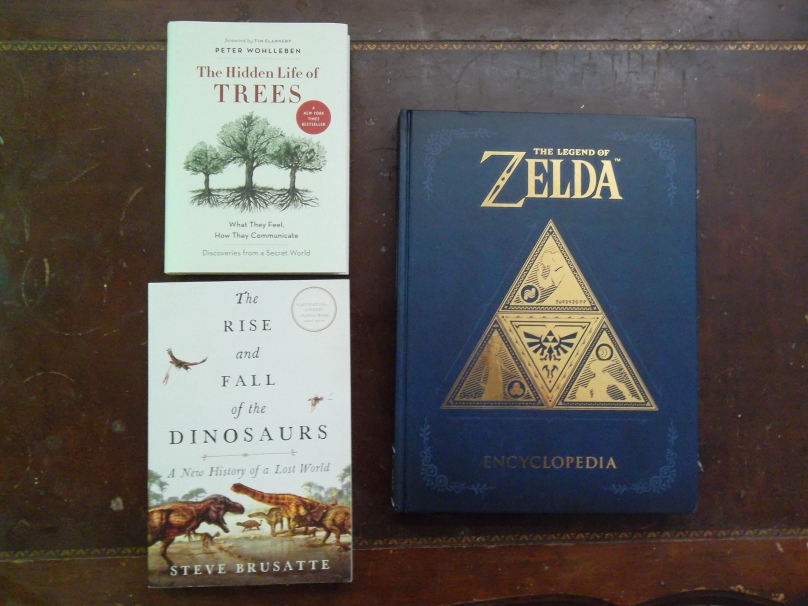 The Hidden Life of Trees by Peter Wohlleben is a book I’ve had my eyes on for a while. It’s a part of an ongoing initiative of mine to read some more scientific nonfiction. As a bonus the hardcover was roughly 50% off, which made the purchase even more worth it. While I can’t say I have a particular passion for trees from a biological standpoint, I certainly appreciate their natural beauty and love the idea of learning more about what life is like for an organism so unlike us.

The Rise and Fall of the Dinosaurs by Steve Brusatte I picked up at the same time as Hidden Life of Trees. I don’t actually remember where I heard about this book; it may have just been while I was browsing deals on Indigo or something. It was on sale as well. I’ve loved dinosaurs since I was a little kid and reading a more recent account of what science knows about them was too tempting to pass up.

The Legend of Zelda: Encyclopedia is a book I’d had pre-ordered for a while now. It completes a trio of books of art and lore including Hyrule Historia and Art & Artifacts about the beloved video games series. I’m eager to dig into it, which will be my first time actually reading one cover to cover. I have collected them more as objects of appreciation and reference before now, though I may go back and properly go through the previous two. Apparently information contained within Encyclopedia contradicts things in the Historia, which irks me, but I still really want to give it a look. I’ve heard that the latest game, Breath of the Wild, is not included either, which is disappointing. Nevertheless, I really want to crack this tome open and learn its secrets.

My digital purchases have been rather light this month too, though I’m happy with what I picked up nonetheless. Back in April I mentioned how I discovered that a digital collection of the entirety of the series Bone by Jeff Smith exists for about $20. Well, I happened to find it on sale on the Kindle store for $14, which sealed the deal for me. I don’t know when I’ll start it, since it’s easily the longest comic book I own now, but it’s good to have the access.

I also picked up a digital copy of the deluxe edition of DC: The New Frontier by Darwyn Cooke on sale, which is a book I’ve been wanting to buy for a while now. From what I understand the book presents iconic DC characters as having emerged in their world at the same time they were first published in reality, so a lot of the story takes place in the 1950s. I don’t know much more than that, but it comes highly recommended, which is often enough for me when it comes to big comic books. 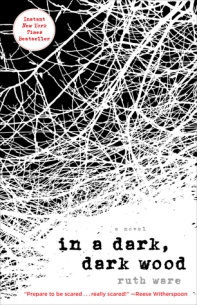 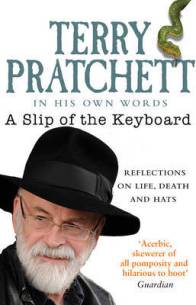 Three out of the four of these books I discovered thanks to fellow bloggers’ WWW Wednesday posts. In a dark, dark wood by Ruth Ware is a book I have no memory of why it grabbed my attention, even after reading the summary on Goodreads. I certainly like the high-contrast style of the cover. I think I grabbed this because of my growing but yet-to-be-acted-upon interest in reading more mystery novels.

The Supernatural Enhancements by Edgar Cantero I shelved because I enjoy the idea of gothic ghost stories and strange locations with a macabre mystery thrown into it. A lot of it doesn’t sound out of the ordinary for the genre, but it’s apparently lauded for its originality, so I’m interested in checking it out.

A Slip of the Keyboard by Terry Pratchett was very close to being one of my new books for this month, but I decided to hold off. I need to get going on continuing his Discworld series as it is, so I didn’t want another of his books distracting me from them. I’m nonetheless really interested in reading the author’s own words and reflections on writing and life.

Rome: A History in Seven Sackings I shelved because I like the idea of having another more concise source on Roman history. I have several textbooks, but I honestly have no desire to add textbooks to my reading regimen.

I’m finding it easier and easier to hold back on buying books, which is probably for the better in some ways. I do hope these posts are still interesting with fewer books being discussed. I do actually find I occasionally get a weird impulse to buy a book so I can post about it here. I haven’t actually acted upon that, but I thought I’d make a note of it as an oddity. Shouldn’t fall into traps like that just to make content.