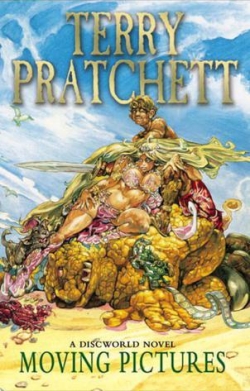 People might say that reality is a quality that things possess in the same way that they possess weight. Sadly alchemists never really held with such a quaint notion. They think that they can change reality, shape it to their own purpose. Imagine then the damage that could be wrought if they get their hands on the ultimate alchemy: The invention of motion pictures, the greatest making illusions. It may be a triumph of universe-shaking proportions. It’s either that or they’re about to unlock the dark terrible secret of the Holy Wood hills — by mistake.

Moving Pictures (1990) by Terry Pratchett is the tenth novel in the Discworld series. It is also the first book in the Industrial Revolution novel sequence, where the catalyst of the story is some manner of technological innovation or invention. Unlike the other sub-series that focus on a specific character or characters, this book introduces a new cast to the reader. It isn’t until the fourth Industrial Revolution book that a recurring protagonist is introduced. This novel, unsurprisingly, follows the emergence of a motion picture industry on the Discworld and the mayhem it eventually unleashes.

Following the death of the last priest on a desolate beach, strange ancient rites are no longer performed, allowing something to escape through a crack in a door in the sand. That something is the idea of Holy Wood, making its way to the city of Ankh-Morpork and across the Disc, giving people spontaneous ideas and compulsions. Film is created by alchemists, thanks in no small part to some artfully industrious imps, and people from all walks of life begin dreaming of their name in lights, inexplicably flocking toward the desolate beach that is Holy Wood to seek fame in this new industry, and more importantly to make “clicks” (movies).

While there is a lot about this book I found fairly standard as far as Discworld novels are concerned, there were some ideas that I really enjoyed. Ideas about the medium of film itself are played with, but it is the Hollywood film industry of our reality that is focus of parody. There are plenty of jokes throughout about the cut corners and compromises that make up “movie magic”, commercialization versus integrity, unfortunate stereotyping, and cheeky references to films the reader is likely familiar with.

I especially liked that something eldritch was at play, instead of the advent of filmmaking simply coming about on its own. It allows the story to play with the very real notion of how the film medium can manipulate reality for the audience, immersing them in an illusion. Though all of its glamour, spectacle, and art are enjoyable, there is something at the heart of the Hollywood film industry that’s a little uncanny too. A touch of madness goes along with the level of passion, scope, and obsession that goes into Hollywood films, not to mention the effects of fame and success that make a person larger than life in the public eye. I really liked the idea that it wasn’t just industry and ambition changing minds in Holy Wood on the Disc, but something invasive, insidious, yet attractive at the same time.

Our protagonist is Victor, former student wizard and rising film star. I liked him well enough, but unfortunately, he fits a familiar mold of Discworld protagonists: a little bumbling, out of his element, and awkward. He is a little bolder and more educated than some of his counterparts, but he wasn’t particularly distinguished either. His love interest and co-star, “Ginger,” felt familiar as well, insofar as many of Pratchett’s female characters tend to treat the protagonist with impatience and irritation. I really did enjoy their relationship for what it was, though, as romance between the two was fairly downplayed. Some side characters allude to them being in love with each other, but most of the time they act like uneasy friends, bonding over their whirlwind success together on screen and dealing with the bizarre forces influencing everything.

The plotline at the heart of the story was the weakest part of the book for me, treading especially familiar territory: something goes awry with some sort of magic, leading to a nigh-cataclysmic turn of events that the core group of characters must reverse. Pratchett’s writing was as skillful as ever, which kept me going, but the increasingly familiar beats left a lot to be desired. To give it some credit, I did enjoy the fact that most of the story focuses on the fleeting society that pops up in Holy Wood, which is not horrible on its surface at all. The problem is the story establishes something is wrong from the onset, continually alluding to it throughout. I never got a chance to settle in to Holy Wood and wonder where things would go because I kept anticipating things falling apart.

One of the better aspects of this novel is the way Pratchett builds out the world of the Disc with its supporting characters. Having read the nine novels prior to this one I noticed a lot of familiar names making notable appearances, including the Librarian from the Unseen University and Cut-Me-Own-Throat Dibbler, a hustling street merchant who first appeared in Guards! Guards! He quite appropriately becomes a sleezy film producer. Passing references and appearances are made with other characters as well, including members of the City Watch. It makes this narrative world, with its wide array of stories, feel all the more connected with its own meaningful history.

My absolute favourite character in the story was Gaspode the wonder dog, a mangy mongrel who develops the ability to speak and think with sapience thanks to the power of Holy Wood. He resents these wonders, along with other unlucky animals, missing the simplicity of living without complex thoughts about morality. He actually turned out to be one of the more complex characters in the story thanks to his ambivalence toward humans. Being a rather sickly-looking stray he’s overlooked and mistreated by most people, yet he is compelled to be loyal to Victor and Ginger despite himself. He also interacts a lot with Laddie, a majestic dog spared human sapience that he becomes unlikely companions with. His wit, disgruntled determination, and scrappy attitude leave me pleased to remember that this book is only his debut, so I will be seeing him pop up again in more stories.

Moving Pictures is a fairly standard Discworld novel, not particularly remarkable compared to some of his stronger works. However, so far meeting the standard for this series means it’s still a humorous, clever read full of great characters and colourful ideas. It is elevated a little more by its diverse cast of supporting characters as well, who in many ways steal the show from the protagonists. I have heard that many of them become recurring characters in later books, which excites me even more. I wouldn’t recommend starting here, there are better books to pick up first, but you easily could if you wanted to. In keeping with the series so far you need not have read any other book to be able to follow along.

One thought on “Book Review – Moving Pictures by Terry Pratchett”