I meant for August to be a much more conservative month in terms of spending money on books. I’m going to Fan Expo in Toronto tomorrow, so I meant to hold back on buying things since the purpose of that expo is essentially shopping for me. Despite my intentions I happened across too many thrifty opportunities to pass up, so I ended up bringing in a fair few books after all.

Normally I’d say September is going to be heavy with new books, since I’m going to Fan Expo, but lately I’ve been a lot less motivated to buy physical comic book volumes. Considering I’ve no desire to read most of them as they come out, I’ve found it’s much cheaper to buy digital volumes, especially since they frequently go on sale. I’m sure there’s a few I will pick up anyway, but I’m mostly on the hunt for art and artifacts, which is a fancy way of saying merchandise and stuff from Artist Alley.

Star Wars: Tales of the Bounty Hunters is an anthology I’ve heard enough about that it rises above the rest of the Legends canon novels, which I typically have no care for. It features a short story about each of the bounty hunters that appeared in The Empire Strikes Back. I figure this book will make for a fine one-off to read since it’s about background characters, so I won’t have to think about continuity too much. Plus, it was $1 at a book sale at my work, so it was hard to pass up.

I found this copy of Murder on the Orient Express by Agatha Christie at a thrift store. I’ve been wanting to get into more mysteries, especially those by Christie, and that book just seemed like a no-brainer to start with. My only regret with it is how shiny her name is printed on the cover. I’m no photographer and I gave up trying to make it decently visible for the photo.

Orange is the New Black by Piper Kerman is another book I found at another book sale at my work (different floor), for $2 in this case. I’m a big fan of the series, but admittedly hadn’t given much thought to reading the book. Once I actually had it in my hand I knew I had to give it a read. The show is great for showing diverse perspectives and telling a wide array of stories, but it is still produced to be dramatic and funny. I’d like a more grounded, nonfictional look at the experience.

The Strings of Murder by Oscar de Muriel is another book that has appeared on this blog before as a personal discovery that has found its way into my new books. It’s another mystery, combining elements of history and horror as well. It especially appeals to me because the series follows the same characters on different cases, but each book is apparently a standalone tale.

Lastly, I picked up Sleeping Giants by Sylvain Neuvel, which appeared on this blog before too, all the way back in March. I’ve been intrigued by The Themis Files for a while now, as a lot of other blogs have written about the series, and decided to take the plunge by picking up the first book. I’ll likely read it relatively soon.

Originally my plan was between picking up Sleeping Giants or de Muriel’s book. I knew I had enough points on my rewards card to get at least $5, maybe $10 off, but I wasn’t sure. So I took both to the counter, intending to buy the more expensive of the two if I could get $10 off, and the cheaper one if only $5. I had enough points for $10, but then it turned out they were on sale because the store had just recently opened. All totaled I was essentially buying Sleeping Giants for full price and getting The Strings of Murder free. They got me. 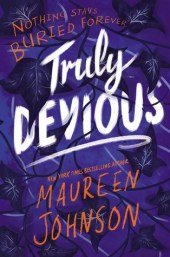 The only digital book I purchased this month was Truly Devious by Maureen Johnson. I’ve been curious of her work thanks to the author’s Night Vale connection, and finding it on sale on the Kindle store sealed the deal. Goodness knows when I’ll get to it though. Hopefully sooner rather than later, as with all books.

Watership Down by Richard Adams is not a discovery by any means. It’s a book I’ve heard about all my life, apparently notorious for being surprisingly dark and violent for its intended audience, yet I’ve never read it. To keep it in my mind I added it to by to-read list this month.

Deadpool Killustrated and Deadpool Kills Deadpool by Cullen Bunn et al I discovered shortly after reading Deadpool Kills the Marvel Universe. I thought the book was a one-off “what if?” type of story, but it’s actually part of a trilogy (killogy). Considering how the first book ended, unremarkable overall story notwithstanding, I decided I should check out all of them.

The Silence of the Girls by Pat Barker I learned about thanks to other bloggers’ WWW Wednesday posts. It has only just been released and tells the story of the Trojan War from the perspective of Briseis, giving a female perspective to a very male-centric conflict. I’m excited to check this book out.

And the Ocean was Our Sky by Patrick Ness I only just heard about a couple of days ago. It’s apparently touted as being like Moby Dick told from the perspective of the whale. I don’t always go for YA books, but I want to check it out because I’m always interested in learning the ways authors can make non-human character perspectives relatable yet distinctly non-human, which I’m hoping will be the case here.

It occurs to me now, as I write this, that The Strings of Murder‘s whole appeal to me as being part of a series of standalone books following the same characters on different cases is probably quite typical in the mystery genre. Heck, I’ve read a couple Philip Marlowe books and I know for dang sure I didn’t need to have read one to know what’s going on in the other. Well how about that. I probably made myself look marvelously clueless. Oh well.