In an odd twist, September is an even lighter month than August despite my trip to Fan Expo on the first. The trip was a lot of fun at any rate and I came home with neat curiosities, art, and dumb things I didn’t need but enjoyed getting anyway. I even came home with a few books. Though I wasn’t able to find some that I was actually looking for, I’m happy with what I did manage to pick up. 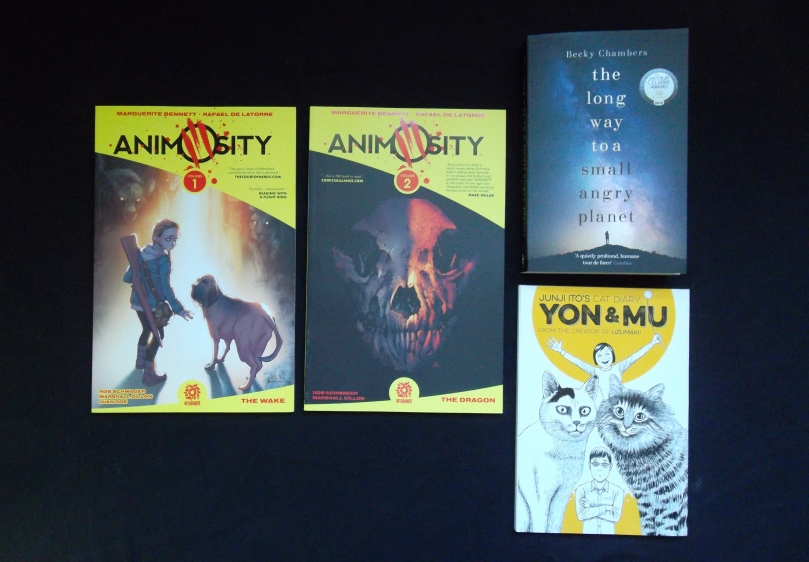 The Wake and The Dragon are the first two volumes of Animosity by Marguerite Bennett and Rafael De Latorre, a comic book series I’ve been wanting to start reading for some time. Essentially, all of the animals in the world inexplicably “wake up.” They gain the ability to think and speak like human beings, which immediately disrupts the natural order. Many of them, understandably, resent humanity, while others simply have trouble coming to grips the moral question of eating other animals who now think and speak as they do.

Junji Ito’s Cat Diary: Yon & Mu is a book I wasn’t expecting to pick up, but I suddenly came across it at the expo and knew I had to. I’ve already read and reviewed it, which you can check out here. It’s simply the famous horror author’s experiences becoming a cat owner made into a comic book and I loved it.

The Long Way to a Small, Angry Planet by Becky Chambers is a book I’ve heard too much about to not pick up. It appeared under “Novel Discoveries” back in July, and I continued to hear other blogs talk about it, or the series it’s a part of, after that. I happened to find myself at the bookstore while waiting for the bus and despite my intentions to just browse I had a hard time putting this novel down after I discovered they had copies. It will likely be one of the books I close out the year with.

Frankenstein by Junji Ito is a collection I was very excited to learn is coming out in October. The featured story is Ito’s adaptation of the famous novel, but the book collects other stories as well. I’ve been eager to read more official translations of his short works and this book cannot come out soon enough.

A Gathering of Ghosts by Karen Maitland is a novel I learned about on another blog’s WWW post. A historical novel pitting pagan beliefs against emergent Christianity with a supernatural twist? Sign me up.

Mary Wept Over the Feet of Jesus by Chester Brown I decided to look in to after reading Ed the Happy Clown this past month. All the craziness of that book notwithstanding, I found Brown’s representation and exploration of religious imagery and content fascinating. I since learned he adapted certain lives of Saints, as well as this book, which explores representations of prostitution in the Bible. It sounds really interesting and I want to learn more.

Art Matters by Neil Gaiman is a book I’m interested in as a potential motivating piece. I know it includes “Make Good Art,” the author’s 2012 commencement address at the Philadelphia University of the Arts, which I have heard before and simply loved. I want to read more writings like it.

The Radium Girls by Kate Moore I want to read out of historical fascination. I first heard the story in a relatively short video on YouTube and have been interested since. It seems to be a particular watershed moment of a business screwing over the health and safety of its workers for its own benefit.

Lastly, Batman: White Knight by Sean Murphy is a book I’ve just remembered to shelve and want to read simply because of its premise. The Joker has been cured of his insanity. While this seems like a breakthrough turn of events, the former Clown Prince has a lot of ire with the idea of Batman and all he does to Gotham City in pursuit of his unique brand of vigilante justice. I’ve heard good things about this book and some bad things. Ultimately, I really just want to read it myself.

Weirdly more than any other month I’m staring at my books feeling like I’ve forgotten one, though I cannot recall any that I actually have. For some reason I think I left Expo with more books than I did…maybe it was just more than I thought I would regardless, so my memory is warped with that vague impression? I don’t know. I think this is the first month since starting these I haven’t made a digital purchase either, so maybe it’s that. If I did forget something I’ll be sure to blurt it out next month