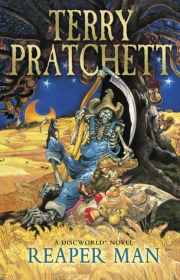 I’m within the last 100 pages of Reaper Man by Terry Pratchett and aspects of it are among my favourite of all the Discworld books I’ve read so far. Death’s experiences as Bill Door, an alias he’s adopted while a farmhand in a very small town, have me hooked. He’s been learning the simple ins and outs of mortal life as well as trying to cope with the unending march of time, which never used to effect him. It’s fascinating to see such a usually insightful character become confronted with very commonplace truths like mortality that he has trouble dealing with emotionally. What I’m not so sure about is the story around the Wizards dealing with the overflowing life force in the world while Death is retired. It’s been entertaining, but has dragged a bit and is going in weird places that I’ll have to see through to the end before I know how I feel about. I should be done with the book in a few days.

Sadly, nothing this week. I’m going to have to kick myself in the butt a bit to get some more graphic novels read, especially since I want to take a break from reading for the last week and a bit of December, starting on Christmas Eve.

Though pretty far from a read fit for the season, one of the graphic novels I intend to read next is Tomie by Junji Ito, the largest book of the author’s I have in my collection. The stories within follow the travails of a beautiful young woman named Tomie who is frequently murdered by men who obsess over her. That’s just the thing though; she’s killed, yet she always comes back. Though an apparent victim of toxic passions, there’s something darker lurking behind her beautiful visage. That’s as much as I can surmise from my limited exposure to it, anyway, and I’m eager to dive in.

Until next week, thanks for reading!