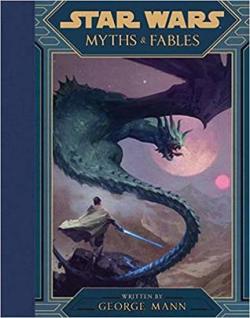 Star Wars: Myths & Fables by George Mann is a middle grade collection of stories set in the Star Wars universe, with an illustration by Grant Griffin accompanying each story. Though the connections are not especially overt, the book was released as a part of the Star Wars: Galaxy’s Edge media project. Unlike a typical collection, each story is a piece of in-universe folklore from across the galaxy. Some are self-contained little fables, while others work to mythologize iconic characters we know and love from the films.

Admittedly, I picked up this book without realizing that the intended audience is much younger than I am. I couldn’t help dealing with some degree of disappointment as a result of this, but I did try to be mindful that I am not the target demographic. The accompanying art, which was another draw for me, is quite gorgeously rendered. The style reminds me of more classic fantasy art that would accompany books and/or stories in pulp magazines.

Despite my misgivings, I do feel a select few of these stories were pretty good. The opening tale, “The Knight & the Dragon”—which I presume to be about Obi-Wan during his years in hiding on Tatooine—was enjoyable for how it worked to combine a classic, timeless sort of tale with Jedi philosophy. It also did a good job of humanizing the Tusken raiders, the indigenous peoples of that desert world, even while they must commit immoral acts to survive. “Gaze of Stone” was quite good as well, expanding a little upon Sith history and what they’re capable of, insight which has been more limited since the new canon started, and ending with a rather unsettling fate-worse-than-death for one of them.

Many of the other stories were unfortunately pedestrian for me, however. A particular reason for this is that the implied sources of some of these fables are places I had no frame of reference for. “Vengeful Waves” tells the story of two aquatic species, one of them becoming too expansionist and eventually suffering from their own avarice. The problem I have is these species seem to have been formed as a concept just for this book. Considering there’s already a better-established world with two aquatic species who have had issues coexisting it’s strange to me that they’d opt instead to invent two new ones.

The same issue comes into play for me in the stories “The Wanderer” and “The Dark Wraith.” The former is about a wandering Jedi who shows up on three separate occasions to help the city of Solace on the planet Cerosha, and the latter is about the same place and their folklore around Darth Vader, painting him as a sort of boogeyman who punishes those who act rebelliously. I have no solid understanding of what this place is, planet or city, nor the people inhabiting it. They’ve never appeared anywhere before now. I’m all for inventing new peoples and places for expanded fiction, but when it’s a collection specifically meant to capture folklore within the fictional world itself, I do not understand why the author would pull from the most obscure of places or invent them whole-cloth.

I assume the purpose of a book like this, regardless of the target audience, is to expand upon already established people, places, or concepts. “The Knight & The Dragon” worked well because I already know what Tusken raiders are and their limitations as a people. Their understanding of events is going to be more primitive, for lack of a better word. That’s a passive lens that I inherently understand. Without a frame of reference for the people of Solace it just made the reading experience confusing. Why don’t they know what a Jedi is? Why does Darth Vader become a vengeful ghost thing in their stories, when he was ostensibly the poster boy for Imperial oppression across the civilized galaxy?

More than anything else, it just feels like a lot of wasted potential that only inches toward realizing it. I’ve mentioned a couple of the stories I did like already, and another “The Witch & the Wookiee” edged toward the weird in a way that I liked too, but most of them were just mundane to me. Star Wars has a wealth of diverse aliens and places, yet for the most part these stories are the simplest of parables and adventures. Even the story “The Droid with a Heart” intrigued me for being an example of Droid folklore, yet little about the way it is written sets it apart from the rest. I can imagine how unique the storytelling of sapient machines might be, and I wish more of an attempt had been made to try and present that.

I worry I’m being a little too hard on Myths & Fables, especially considering the younger target age group, but I must be honest about my takeaway. They’re not awful by any stretch, just uninspired. A collection of myths from the Star Wars universe is a great idea, yet they just didn’t play with that as much as the diversity of that universe would have allowed. It may be worth more to younger fans than I can see, but you’re not missing much, other than some really nice illustrations, if you decide to skip this book. The art really is fantastic, for what it’s worth.