Welp, there goes summer. How about that. Somehow June feels both ages ago and like it only just passed. I will miss it. But now it’s Autumn, the spookiest time of year where everything appears to die. I’m real excited for it. This has nothing to do with my new books. Speaking of which…

On to the books! 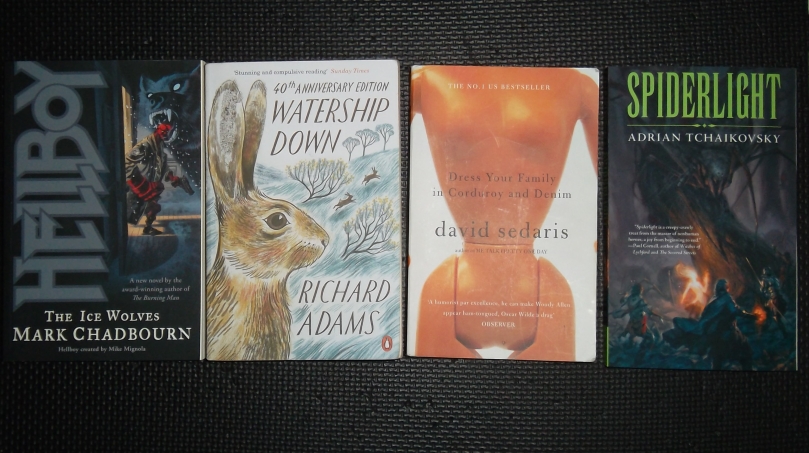 The Ice Wolves by Mark Chadbourn I thought would be included last month, but it didn’t arrive as soon as I had expected. It is by no means the next Hellboy novel I need, but while ordering Hellboy playing cards off of TFAW I noticed this was the only novel they had left in stock. Not wanting to pay more for shipping than the item I was buying, or some such nonsense, I picked up this book as well. I’ve nearly got every novel now.

Watership Down by Richard Adams was one of two thrift store purchases this month. Almost without fail there’s a good find every time I go to my local Value Village, though I don’t go all that often. It’s just one of those books I’ve been meaning to read for a while and finding there was hard to resist.

Dress Your Family in Corduroy and Denim by David Sedaris is the other book I picked up at the thrift store. I started getting into Sedaris’s books a few years ago, but it’s been a while since I picked one up. Finding this among the books for sale I decided to jump on it.

Spiderlight by Adrian Tchaikovsky is a fantasy novel I’ve had my eye on for a few years now—long enough that I’m not even sure I remember what grabbed my attention about it in the first place. I believe it has to do with a story appearing to have black and white morality, with the characters learning that the world is more grey than they realize, but I’m not actually sure. In any case, I picked it up because I finally earned enough points to get $20 off a book from Indigo. For some reason this book is a $30 paperback, so it was the perfect candidate for such a discount. 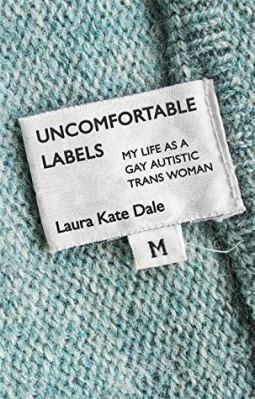 Shelved a few more books than I usually do in the old to-read list this month, since they’re not all in a row here like I like.

The first is No Longer Human by Junji Ito. I decided to search for the author’s name on Indigo to see if he had any upcoming books coming out in North America. Sure enough, this came up in the search. Apparently it’s an adaptation of a famous Japanese novel. I admittedly don’t know much about it. Ito is working on it and that’s good enough for me.

Uncomfortable Labels by Laura Kate Dale is a memoir I heard about on a podcast I’ve been catching up on. One of the hosts had a book coming out this summer, which I hadn’t been aware of. Not sure if I’ll ever pick it up, but I wanted to at least put a pin in it.

The Faceless Old Woman Who Secretly Lives in Your Home by Joseph Fink and Jeffrey Cranor is the next Welcome to Night Vale novel. This was a no-brainer and I was really excited to learn it’s coming out.

Steel Crow Saga by Paul Krueger I read about on another blogger’s WWW post. They said much of it reminded them of Pokemon, Full Metal Alchemist, and Avatar: The Last Airbender. I think all of those things are great, so decided I ought to keep the book in mind.

From the very same post I learned about A Lush and Seething Hell by John Hornor Jacobs. I only vaguely recall that the two stories contained within sounded really interesting, but also that title. The cover. (I’m a sucker). I need to read more horror I haven’t heard of and this book seemed perfect on many fronts.

I haven’t really got the usual sort of closing thoughts that I normally do while writing these. It’s turned out I’m posting this awfully late as well. It’s still September by my clock, so I’m not ruffled about that, but I wanted it up much earlier in the day. I made choices that stopped that. I’m my own worst enemy.

Anyway, while I was taking the photo of my new books a thought occurred: without me saying so (what I’m doing), none of you have any idea that there are three snakes within a foot of those books. How about that?

Happy October everyone! Thank you for reading!