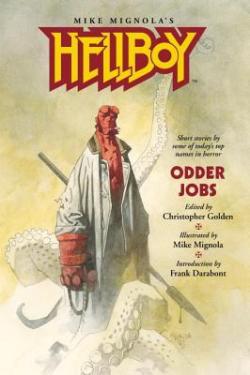 My second book for Frighteningly Good Reads 2019 is Hellboy: Odder Jobs, the 2004 sequel to the first Hellboy anthology Odd Jobs, once again edited by Christopher Golden. This book collects 16 stories by a variety of authors including one by Frank Darabont and another co-written by Guillermo del Toro. Each story is accompanied by an illustration by Mike Mignola. My history with Hellboy anthologies has been a little out of chronology; when I first started checking them out I read Odd Jobs (1999) and An Assortment of Horrors (2017) within months of each other, the latter being the most recent release. I was excited to finally continue the “odd jobs” trilogy (as I’m dubbing it) properly, hopeful that my positive experience with the two books I’d previously read would continue.

What was most striking to me about this anthology was how consistent it turned out being. It’s a common cliché to say that they’re a mixed bag, but I’d honestly say this book was of fairly uniform quality throughout. There were some I liked more than others, but none really stuck out to me especially unenjoyable to read or divergent from an emerging tone. The loose motif of these being “odd jobs” that Hellboy and/or his compatriots embark upon is still present, but this most often took the form of cases that are more somber or poignant in how they develop.

My favourite stories were those where the solution did not involve Hellboy simply hitting his way out of a situation. “Brotherhood of the Gun” by Frank Darabont has him assisting some ghosts in convincing another spirit that he is in fact dead, to help him pass on. “From an Enchanter Fleeing” by Peter Crowther sees a town beset upon by a fog of grief spilling over from the afterlife. More humorously, “The Vampire Brief” by James L. Cambias has him suing a vampire in court because the law is stopping him from just staking him in the heart the old-fashioned way. I loved how stories like these highlight that he isn’t just a big bruiser who fights monsters, but an attentive, intuitive, and even compassionate investigator as well.

Speaking of monster fighting, however, my favourite story from this collection was “Act of Mercy” by Thomas E. Sniegoski for the way that it put a twist on this particular aspect of Hellboy’s job. He is summoned by an old foe, thought to have been soundly defeated, who wants a chance at retribution. Children will die if his challenge is not met. When Hellboy gets there, however, he cannot remember who this demon is, and he turns out to be sickly and decrepit, far from the formidable foe he’d been. Their initial showdown was monumental for the demon, but for Hellboy it was just another job that has long since blended in his mind with countless others. It took a very basic formula for a Hellboy story and compromised it significantly. The demon was a monster that needed to be killed, but it was no longer as straightforward as just beating down the bad guy.

Another common motif was characters trying to come to grips with where they come from, who/what they are, and how they fit into the world they live in. “Down in the Flood” by Scott Allie explores some of the amphibious Abe Sapien’s trouble being accepted by everyday people while on a mission in a flooded Ohio town, brushing up against beings similar to himself, while “Water Music” by David J. Schowr has him embarking upon a sort of dream quest into his subconscious, where he is confronted by an imagined ancestor. “Sleepless in Manhattan” by Nancy Kilpatrick has Hellboy fighting a demon that pretends to be related to him, while “The Thrice-Named Hill” by Graham Joyce has him discovering an actual long-lost sister, complicating his mission. None of them reframed the characters in any particularly dramatic way, but I enjoyed the introspective nature of them. It’s always nice for greater peak inside a character’s head that prose allows.

While I do feel Hellboy: Odder Jobs was a consistently enjoyable anthology, this comes with a little caveat: for the most part they were middling in quality. None of them were bad, but even my favourites among them didn’t jump out at me all that much. It’s a decent source of more Hellboy short stories if that’s what you’re looking for, as I was, but I must admit it’s also quite skippable.