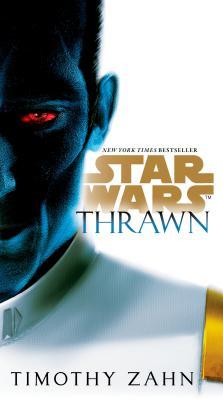 Star Wars: Thrawn is the first book in a trilogy of Star Wars novels centred around the titular character, a blue humanoid alien with red eyes from the Chiss species, who rises to great prominence in the Imperial navy in the time between the prequel trilogy of Star Wars films and the original trilogy. The author originally created the character in older novels that are now deemed “Legends.” This is the first novel to feature the character in the new canon since Disney’s acquisition of Lucasfilm, initially debuting him in the series Star Wars Rebels.

In this first novel, Mitth’raw’nuruodo, simplified as Thrawn, is discovered on an uncharted world in Wild Space by Imperial scouts. Apparently exiled by his people, the Chiss Ascendency, he impresses the officers sent to investigate by cleverly sneaking aboard their capital ship despite his limited resources. Brought before the Emperor, Thrawn’s talents for strategy are recognized and he wishes to serve the Empire with the hope that, should it be needed, the Empire might come to the aid of his people. Seeing his knowledge of the Unknown Regions of the galaxy as a further asset, the Emperor allows him to enroll in the Imperial Naval Academy, with the reluctant cadet Eli Vanto to accompany him as an aid and translator.

Perhaps unsurprising considering the title, the book puts a lot more focus on character rather than story, which is well realized throughout. I never tired of reading about Thrawn and Eli as a duo, the latter attached to Thrawn as his aid well beyond their time at the academy. They almost have a Holmes/Watson sort of dynamic, Thrawn inspiring awe with his ability to evaluate threats and effectively deal with them in ways most others cannot. For his part, Eli tries his best to contextualize and explain Imperial politics, societal expectations, and prejudices that Thrawn does not quite understand. I enjoyed how often Thrawn is accidentally insubordinate, being so bluntly matter-of-fact that he doesn’t take decorum into account when talking with nearly anybody else.

On his own, Thrawn actually serves as a fairly good example of a flat character arc. While he does continually rise in rank over a shorter time than normal, there isn’t a marked change in him as a person. Rather he has a more noticeable effect on those around him, whether it is shaking up expected Imperial hierarchy by more openly planning with his crew, or subtly nurturing Eli’s own overlooked talents as a tactician . He is otherwise a fairly stable character, sometimes vexed by challenges but never terribly losing his handle on things. Despite this he never came across as boring, uninteresting, or too competent.

Most striking was how, as a member of the Imperial navy, he made the Empire look a lot more morally grey than we usually see. His methods often try to minimize loss of life as much as possible while maintaining order, and he has a respect for the art of other cultures that isn’t seen in the cold, bureaucratic Empire. His motivations are revealed to be a little more pragmatic than compassionate, but his actions nonetheless come across more like respectable law enforcement rather than ruthlessly authoritarian. We still see plenty of the ugly side of the Empire, but it was refreshing to see it operate in a more ideal way. It lent credence to the idea that some Imperials really thought they were on the right side.

Shifts in the writing style depending on perspective helped to keep things fresh, as the story focuses on numerous characters. Oftentimes Thrawn and Eli are together, but whether it is told from the former or the latter’s perspective we are presented with different levels of insight. While Eli often puzzles out some of Thrawn’s maneuvers, revealing his own talents, Thrawn’s is especially unique by presenting how he observes the subtle facial cues and body language in others. By balancing perspectives this never overstayed its welcome either, as it might have become tiresome minutiae if it was present constantly.

The plot itself was fine, but not much to talk up. A series of seemingly isolated incidents, skirmishes, and uprisings are the machinations of a figuring calling themselves “Nightswan,” and while on a case by case basis I was invested, the narrative through-line with this character wasn’t especially climactic.

Additionally mirroring Thrawn’s story is that of Arihnda Pryce, the head of a mining company who begins to work her way up the Empire’s political ladder. This character is also from the Rebels series, giving her a prior connection to Thrawn, but her inclusion here was the weakest part of the book for me. It wasn’t without its intrigue, the glimpses into that shadier politics between high ranking officials fairly enjoyable, but I was always eager to get back to Thrawn and Eli. The way her actions and desires get wrapped up in Thrawn’s concerns didn’t become as interesting as I’d hoped either.

Thrawn is a great origin story for the character, regardless of your familiarity with him, though without knowing who he is you could hardly be blamed for skipping this book. It’s not especially heavy on plot, but the characters mostly make up for that. I applaud it most for giving a more nuanced look at the Empire and the good that many in-universe must have seen in it, without trying to justify the cruelty we’re all familiar with. With a solid foundation for the character laid here, I look forward to continuing this series.