Bloodborne: The Veil, Torn Asunder by Aleš Kot, Piotr Kowalski, & Brad Simpson is the fourth volume in the comic book series based on the Bloodborne action role-playing game developed by FromSoftware. Like its predecessors by the same creative team, this book is largely a standalone story. It follows Yarem, a self-styled adventurer, who has traveled to the city of Yharnam to uncover something he believes to be truth; that the nightmarish visions he occasionally suffers from are not the product of his sick mind, but rather glimpses into a reality overlapping with the human world. Reading an overlooked page in an old tome, which he understands while reading but can never recall the words of, he embarks upon a strange journey that throws all of reality into question.

I do get into some of my own interpretations here, which some may consider spoilers. If you care about that, you have been warned.

This book is by far the vaguest the series has been, and that is saying something after Eileen’s strange odyssey to solve a Hunter’s murder in A Song for Crows. As I said, this book follows a new protagonist and initially sets things up in a way that is fairly easy to follow, as outlined above. He serves as our narrator, guiding us through his actions and what unfolds from panel to panel. Dialogue is sporadic, interaction being of little service to the story as it transpires. He seeks the truth, and that is an anchor of sorts, though how that might manifest is up to interpretation.

Catalyzed by the page he has read but can never remember, and possibly from ingesting the blood of the Healing Church as well, it quickly becomes apparent that the narrator’s placement in reality is unreliable. While initially things follow a fairly straightforward progression of events, he begins to revert to previous moments as if waking from a dream, only to be thrust back to where he was before. When he first takes the mysterious page from a book in a library, he is lifting his head from it after having fallen asleep, tearing the page to take along with him. The story sometimes finds him back at that point, momentarily, head rising from the book, but it never feels concretely like his point of origin. This raises questions about where reality truly ends and the dream begins, or if it ever stops being reality in some warped sort of way.

He descends deeper into these twisted realities, inviting revelation, reflecting on traumas he suffered in war, and discovering that he seems to have committed some terrible crimes, having been unaware of some of his apparent actions. He is transported to many different times and places in and about Yharnam, beholding many strange and harrowing sights while puzzling out the nature of reality as it is unveiled for him. Some of these include moments from past volumes; he glimpses the Hunter and the strange child from The Death of Sleep as they walk through the Fishing Hamlet, and he briefly encounters Eileen as she travels through the forest, exchanging some words before vanishing again. 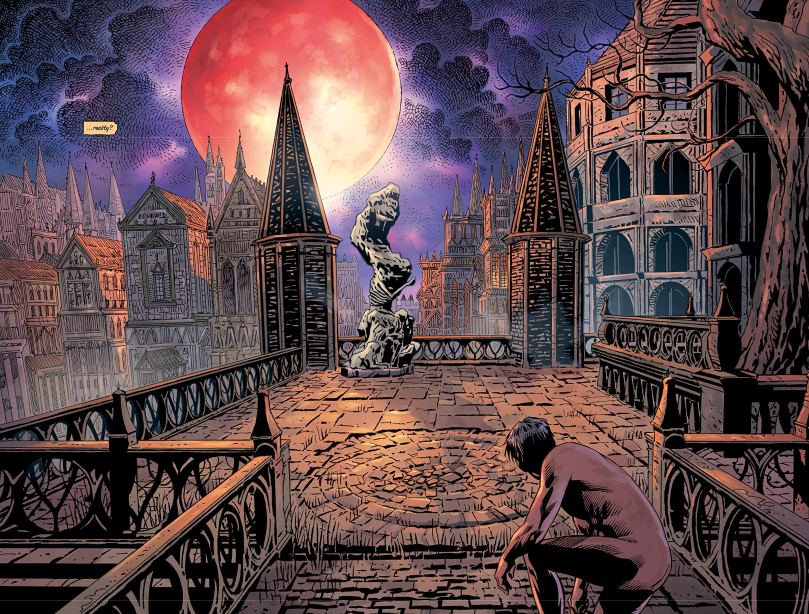 During this journey we are treated to some beautifully haunting landscapes, spectacles, and other nightmarish vignettes of Yharnam. A standout moment of interest is a fight between two of the boss monsters from the game. It felt the most in service of providing some sort of visual spectacle, but I enjoyed it. Kowalski’s art continues to be a treat for the eyes, if the macabre is to your taste.

The story is heavy on introspection and makes a considerable effort to obfuscate a concrete explanation, if you consider anything truly explained at all. Unlike any of the volumes before, I’ve been left with the question “Does this really mean something, or is it a lot of vague waffling with Yharnam as a backdrop?” I must say I couldn’t blame anybody for feeling so after reading this particular volume. I’ve lauded the writer/artists on this series for capturing the obscure spirit of the games so well, but they’ve perhaps made finding meaning a little too obtuse here.

What stops me from dismissing it entirely as such, however, is the fact that there are clues in the content that one can glean meaning from. This book, more than the others, benefits most from having more intimate knowledge of the video game itself, as beginning every chapter is a page depicting a rune from the game called Formless Oedon. Oedon is a Great One with an unseen yet consistent presence throughout the game. Understanding that this book in grander terms seems to be concerned specifically with him and his role, and incorporating knowledge from the game, a clearer picture of what this volume is trying to say can be seen. I don’t think it’s deeply profound, but it does flesh out the world further in its own way.

With all of that being said, this is really hard book to recommend. I enjoyed it as a Bloodborne fan, but I really don’t think it’s accessible enough for anybody who isn’t. I suspect fans may be frustrated with it too, as it ultimately does spend more time leaving your wondering than it does telling a concrete story. I do enjoy explicating meaning from these books, though, so I’m largely happy with it. A story that’s a little more conventional wouldn’t have been amiss, though, all the same.