The first quarter of 2020 has come and gone already, and three months hasn’t felt so long in a very long time. A lot has changed, but at least the books haven’t gone anywhere. Since I’m trying to more seriously approach completing my challenges this year, I thought I’d give a little update about where I’m at with all that.

This year I decided to more significantly reduce my Goodreads challenge, from 70 to 55, so I wouldn’t stress so much about falling behind on it. As of today, I’ve read 13 books: 6 text-only books and 7 graphic novels. This sets me at one book behind schedule, but correcting that is simply one comic book volume away. So, it’s looking pretty good at the moment. I am having a bit of trouble not putting pressure on myself to read faster, though, but I’m hoping with more time that will subside even more.

While the Goodreads challenge is simply a numbers game, this is the curated list I have to get through. 22 books were selected this year, comparatively lower than previous years, so hopefully I’ll actually finish it (for the first time). 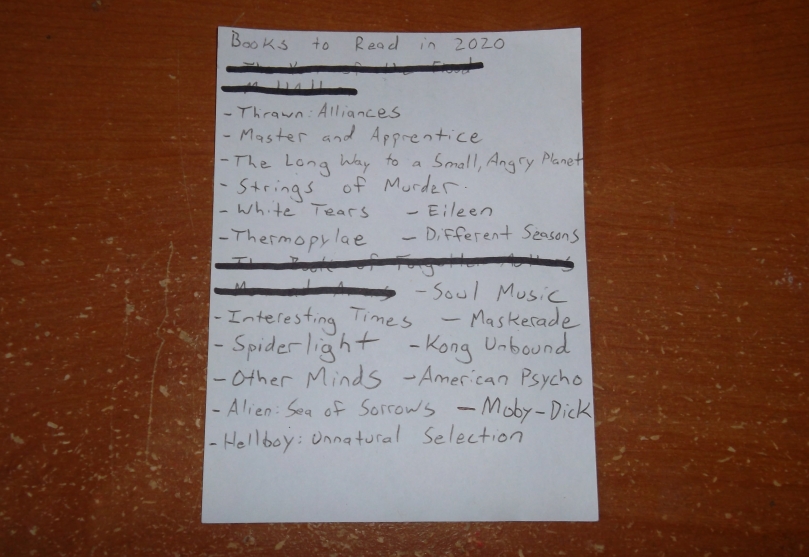 Since January I have read from this list The Book of Forgotten Authors by Christopher Fowler, The Year of the Flood and MaddAddam by Margaret Atwood, and Men at Arms by Terry Pratchett.

Having only read four so far, I’ll have to read six of the remaining books every three months to actually finish the list. This have given me pause. I hate math. The numbers are working against me. I will have to make a greater effort to pull from this list more often, which will be hard because there are books coming out this year that I want to read and they’re not listed here.

I guess I’ll have to read faster after all…

On the plus side, I was able to complete two of my smaller goals for 2020: I finally finished Margaret Atwood’s MaddAddam trilogy, which I’d been putting off for years, and I read at least one Discworld novel in the first quarter. I’ll just pat myself on the back for those small victories real quick.

I normally reserve this topic for Writing Reports, but since I don’t have much to share, I’ll just do a quick update here.

I wanted to start writing more creatively this year, but so far that hasn’t quite taken off, particularly in terms of short stories. I have done virtually no work on any of those, though I did have one session where I wrote out something a little more personal, which I’ve put a pin in for now. Not sure if I actually want to expand on it yet.

I’ve been working on an outline of my fantasy novel instead of writing it out completely, which is actually bearing some valuable fruit. I reworked the initial setting a little, getting it to a place I’m happier with. It still closely resembles what I had before, but the draft I was writing doesn’t line up at all anymore either. A few small, yet crucial changes and it all falls down.

Establishing the baseline for where the characters are at and the minute details of the setting has been challenging for me (nobody built a world in a day). There’s still a lot to hash out, but I’m happy that outlining has given it a more distinct shape in my mind than it ever had before.

I’ve had a harder time getting myself in a mindset to work on it in these uncertain times, but I’m hoping I can shake that a little. It is of course natural to find that these circumstances weigh heavy on the mind, but I think I’ll be better off in the long run if I can manage to refocus myself.

I hope you’re all doing well, or even just the the best that you can. Thank you for reading!

One thought on “Reading Challenge Update”