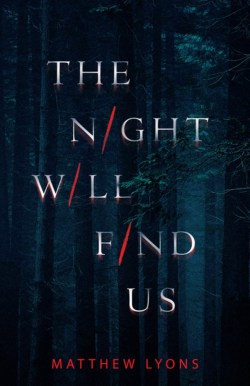 The Night Will Find Us is a newly published horror novel by Matthew Lyons, and my first Frighteningly Good Read for 2020. Six teenagers embark on an end-of-school-year camping trip into the Pine Barrens of New Jersey, a million-acre forest in the heart of the state. Just as they’re setting up camp, a fight between two of them turns ugly, splintering the group. Shaken by this fatal turn of events and finding that the path back out has somehow disappeared, they slowly learn that other people are the least of their worries. Something dead and dreaming lies at the bottom of a lake in the centre of the forest, and it doesn’t want them to leave.

From the outset of the novel things felt rather familiar; a group of teens heading off into the woods to party is the foundation of many horror stories. We’re introduced to the six—Chloe, Parker, Adam, Nate, Nicky, and Josh—as a group, rather than individually, so at first it felt like a lot of characters to keep track of. Lyons did a good job of making each feel distinct pretty early on, however, if a little clichéd. Nate, for instance, is the heavy-set, fouled mouthed, and snarky friend whose hobbies include blowing things up with fireworks. He stuck out the most. Everybody else fell into fairly typical roles early on, but felt more nuanced as the story progressed.

We come to know the characters better further along in the story thanks to Lyons wasting very little time getting them to the Pine Barrens. It wasn’t long after they arrived at their campsite that two of this book’s related strengths started to come into play. Namely, that things started to get weird and as a result I wasn’t able to predict where the story was going. One character starts travelling with a ghost for a little while, another turns into a hideous monster, and yet another inexplicably (or not?) starts getting visions of past horrors that have occurred in the forest. Weirdness goes well with cosmic horror, which is at the root of this story, and I loved how it kept me guessing for a good portion of my reading experience.

Though the group is large and most of them get at least a slice of being a perspective character, the two primary characters are the cousins Chloe and Parker. Of the two I preferred reading from the latter’s perspective, because he had the most motivation. Chloe was fine as more of an “everyman” sort of character who was doing her best to adapt to such harrowing circumstances, but a lot of her side of the story had her reacting to things being thrown at her, rather than being more proactive.

Parker, on the other hand, had an ulterior motive in going to the Pine Barrens: he’s looking for his father, who disappeared there the previous autumn, which is the source of his broody demeanor. He’s also the one who travels with a ghost for a while, which made for a great bantering dynamic with sinister undertones. Parker’s following of the bread crumbs left behind by his father and discovering his ultimate fate, which had finality yet raised more questions, were the best parts of the story for me.

After this subplot was resolved the book became more simply about survival, as the dwindling group had to figure out a way out of the forest, with one of their own turned into a monster and continually stalking them. A lot of these parts of the story felt like the book was just spinning its wheels and I wish there had been a little more to it all than just escape. I liked it well enough, but after the sense of the discovery from Parker’s story was lost it felt like something was missing. We do come to understand the nature of the horror at the bottom of the lake to a meaningful extent, but that branch of the story came with its own host of problems too.

Despite how much I did enjoy this book, it had a few nagging problems, in fact. As far as the cosmic horror goes, I think it was actually too nebulous for its own good. I appreciate that Lyons avoided over-explaining, but a great many questions were raised about what exactly its motivations were and what it even wanted, yet there weren’t any satisfying answers provided. There seemed to be greater stakes than just the loss of life, but I don’t actually know what they were. For instance, Parker talks about having camped in the Pine Barrens with his father often while growing up, yet nothing supernatural had happened before. The incident at the beginning of the story might have catalyzed things, but it’s also clear from the history we see through Chloe that that isn’t required to incite the thing in the lake to act. So I’m left to wonder why this happened at all, in a way that frustrates rather than haunts me.

The size of the Pine Barrens also felt unusually small, despite its supposed vastness. Characters who seem separated by great distances run into each other rather inexplicably, and places seemingly swallowed up by the forest never seem too far away from where the characters are located, or they’re somehow just easy to track down again. It felt too navigable for the characters, when the sublime terror of being lost in a vast forest seemed to be part of the point. It could be the thing in the lake’s influence over the terrain was to blame, but its abilities in that respect seemed rather inconsistent too.

Lastly, despite being the most interesting character, I had a lot of trouble coming to terms with Parker. Fairly early on, he commits a rather coldblooded act, something that cannot be taken back. The other characters never really let him live it down, which is good, but as I got to know him more and more it increasingly felt like he had done something out of character. There wasn’t anything to suggest this actually had to happen either, except that some other more interesting developments do depend on it occurring. Forcing an event just for the convenience of something later on feels too contrived though, and this kept bugging me. It felt wrong that I liked him, knowing what he was capable of, but not in a way that reflected complexity of character.

The Night Will Find Us had its problems, and certainly didn’t blow me away, but it was still an enjoyable horror read, aided most by how much it was able to keep me guessing through a good portion of the story, alongside some genuinely effective moments of gruesome violence and dread. Each character was decently fleshed out and nuanced too, none of them feeling to me like just monster fodder. How elements of the cosmic horrors in the story were explored may have left me unsatisfied, but they were also intriguing enough that I would be excited about reading a follow-up, whether prequel or sequel. Imperfect but worth checking out.

I would like to thank Turner Publishing for sending me a digital Advance Reading Copy of this book in exchange for my honest opinion. This has in no way impacted my review.