In a last minute decision the other day, I decided to start Eileen by Ottessa Moshfegh as my next book off of my to-read list for the year. It’s been more than a bit since I last read one of her books, this being earlier than the previous two, and apparently her first book to really blow up in popularity, if the number of Goodreads ratings is a good indicator. I’m only 18% of the way through so far, and it’s been fairly slow-going, but I am enjoying the way it is building out the main character and her dreary life. As with her other books, she captures a sense of human misery very well, but in a way that feels mundane in a rather haunting way. I eagerly anticipate Eileen’s impending disappearance, which she plans to enact herself.

On the morning of Halloween I finished reading Alien: Sea of Sorrows by James A. Moore, and with all said and done I’m really quite fond of it. It did have some glaring continuity issues related the previous book, unfortunately, but I can forgive them. It doesn’t stand out as all that unique, especially after all of the setup is done with, but I became decently attached to a number of the characters and I really enjoyed the glimpse into the way the aliens themselves think and feel. It gave us a peak behind the curtain into their psyche without spoiling too much of their mystique. I also loved the ending and look forward to any possible sequels the future has in store (if one hasn’t come out already). I should have a review up soon. 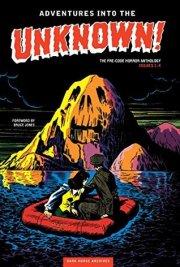 I started Adventures into the Unknown Archives Vol. 1 on Halloween night, but I didn’t get it finished until the morning of November 2. This was my last Frighteningly Good Read and goodness was it a strange little trip. Horror comics in 1948 were weird, or at least these were. Not exactly in a good way, though. The pacing was all over the place and I could never really take any of the “horrors” seriously. One such figure called “the Living Ghost” appeared in two stories, depicted as what looked like a cross between the Devil, Dracula, and Frankenstein’s monster. He was an all-powerful demon with command over the undead who got up to such deeds as strangling switch operators and pushing cars off of cliffs. Captivating stuff.

Initially, I was planning to start Moby-Dick by Herman Melville instead of Eileen, but now I’m wondering if I can finish everything on my to-read list except for that book. It’s still a long shot, but we’ll see. It’s the most daunting book and if I can read all the others except that one I’ll be pretty satisfied. Don’t know what will follow Eileen yet.