I feel like I’m coming up on the final stretch of Dark Lord of Derkholm by Diana Wynne Jones. In fact, I’m fairly confident that if I hadn’t been more swamped with work than normal over the past week or so, I would have had it finished by now. So it goes. I’ve reached a seemingly perfect point of suspense, as Blade has had his Pilgrim Party campaign go horribly awry so far and now they’ve all up and disappeared. We’ve also gotten a bit of a better look at the plan in action regarding trying to get the tours canceled for good, though I’m sure the linchpin will come down to Derk and Blade. I’m hoping that by next week I’ll be talking about this book in past tense, enjoyment aside. Fingers crossed! 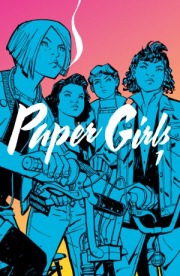 I finally started reading the first volume of Paper Girls by Brian K. Vaughn et al., though I’m disappointed that that’s all I was able to manage. Like I said though, I’ve been a bit swamped. I finished the first chapter/issue of the volume, which was a nicely effective introduction to the characters and they’re surprisingly quickly escalating situation. I was particularly impressed, oddly, but the suspenseful last panel, which has these girls in the 1980s finding a device with a modern Apple logo on it. It’s simple, yet I really liked this small mundane hint of time travel and how it demonstrates how much tech advances in a relatively short amount of time.

Nothing once again, even after being absent last week. Things have just been so tiresome lately.

I’d still like to start reading A Carnival of Snackery by David Sedaris soon, but with it already being September and my reading going at a snail’s pace, I think I’m going to start reading one of the spooky books from my to-read list for the year. For the moment, I think it shall by Pet Sematary by Stephen King. Something easy and hopefully breezy, to help pick up the pace. It seems that the Comixology app has been fixed a bit too, at least as a digital reader (sans storefront), so maybe I’ll dig back into my digital comics soon too.