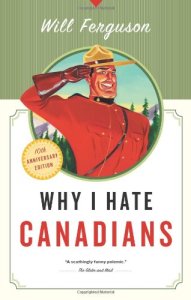 This past week I finished reading Why I Hate Canadians by Will Ferguson, a collection of essays and anecdotes published in 1997 about the author’s experiences as a Canadian, as well as Canadian culture and history more generally. As the title suggests, Ferguson takes a sarcastic and humorous approach, challenging a lot of the points we use to define ourselves as Canadians, often referencing history, contemporary culture, and politics. The print I read was the 10th anniversary edition, with a foreword from the author. It being nearly 20 years since the books original release, the foreword helped to but the book in context.

Why I Hate Canadians is one of those books that has been sitting on my shelf for years. It was given to me as a gift many Christmases ago, and since sat on various shelves and moved with me to new residences before the thought of reading it even crossed my mind. I knew very little in terms of what it was really about, but while thinking of what to read next I was drawn to it. Right off the bat, I must say that I was pleasantly surprised with just how engrossing I found the book to be.

Cultural identity as a Canadian has, for me, been challenging. Growing up in an especially multicultural area of Scarborough (a region of Toronto), I often found myself stumped with the question of what it really meant for me to be a Canadian. I found Ferguson’s book to provide many answers to this question. Despite the length of time between the book’s publication and now, I found much of it still applied. The question of Canadian niceness, the love/hate obsession with the United States, hockey, and even geography were all covered in hilarious yet very introspective ways.

The book utilized humour in a very effective way by critiquing issues Canada faces, or in some cases, tries to ignore. When I first got the book, admittedly, I thought it would be a cheap little book full of quirky, self-deprecating anecdotes that poke fun at Canadians. What I found instead was an affectionate yet scathing look at Canadian society and culture, with a sarcastic twist. To paraphrase gaming media writer Jim Sterling, just because you love something, doesn’t mean you can’t point out its glaring flaws. If anything, you make a big deal about the flaws because you love it so much. Ferguson’s treatment of Canada coincides with this very closely.

A chapter that stuck out to me in particular was “Cold War On Ice.” It has really stayed with me because of the feelings of pride and excitement it inspired. This I found surprising because it discussed something I’ve never been very close to as a Canadian — hockey. Covering the Summit Series between Canada and the USSR, I found the chapter compelling in its account of events and funny in how it took as many jabs as it could at the Canadian attitude toward hockey. It took a very realistic approach to the subject that drew attention to the great amounts of pride, skill, and love Canadians poor into the sport, while not getting too caught up in the positive to bring up points of dissent.

Many other sections brought up more serious topics, such as the treatment of the First Nations and questionable events in our military history, which maintained the sarcastic sounding rhetoric while handling the subject matter with the respect they deserve. As a nation that prides itself on niceness and peacekeeping — which he also does a lot to highlight — I appreciated Ferguson’s ability to bring all aspects to the table without simply sounding condemning.

Sarcastic, funny, critical, and generally informative, Why I Hate Canadians was a great surprise as a book that made me realize a lot about myself as a Canadian, and Canadian society. What I learned wasn’t always positive, but I found most of it valuable. I highly recommend it to any other Canadians, as well as anyone who wants some perspective on the Canadian mindset. It’s not as boring as that sounds.