This past week I read The Right Hand of Doom, the fourth volume in the Hellboy series of comic books by Mike Mignola and published by Dark Horse. Though I’m only a third into the series’ volumes so far, I’ve caught myself reflecting a lot about how different Hellboy feels from other stories, especially when compared to the films.

While doing some light research to refresh myself on past volumes I’ve read, part of a quotation by Clive Barker on the back of The Chained Coffin & Others caught my eye that really helped to capture my feelings on the series: “haunting simplicity.” Narratively, Hellboy is not very complex. Many of the stories are one-shots or mini-series, with a looming myth-arch creeping in occasionally related to Hellboy’s origin and purpose. 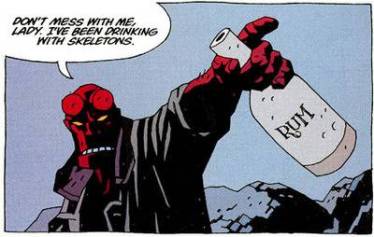 More importantly, a story about big red demon-man who investigates paranormal phenomenon is downplayed a lot more than the idea would suggest. The series has a sense of humour about itself and Hellboy does brawl with more than his fair share of mythical creatures, but it is all presented with a very grim visual style and tone. Though not highly detailed or hyper-real, it is beautiful in how it depicts horror. Shapes are obscured in darkness, the creatures are grotesque, the settings are grim, and eldritch monstrosities defy logical composition.

What I find most interesting about how Hellboy was written is that the obvious route wasn’t taken. While the concept is ripe for a fish-out-of-water type story with Hellboy trying to find his place in the world he doesn’t fit in to, we are instead thrown in when this is no longer an issue. His origin is covered briefly, but where the meat of the story in Seed of Destruction begins is long after Hellboy has become an accomplished agent of the B.P.R.D. (Bureau of Paranormal Research & Defense). 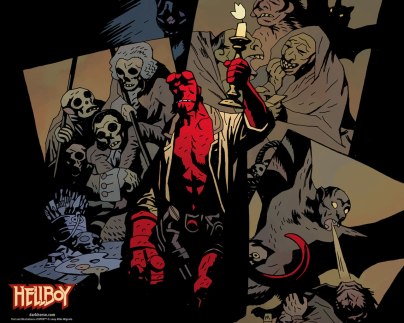 I like that it seemingly decided to skip all that in favour of having Hellboy in a world that more-or-less accepts that he exists. They don’t outright address whether the general public knows about him, but we know he was granted human status by the United Nations, and seems to be at large all he wants without worry. This allows the stories to focus solely on each case, which I find a lot more interesting that people worrying about Hellboy himself. This also helps a lot of the humour to come through. Situations are not inherently funny, but because they are happening to Hellboy — who isn’t as phased by the horrors of the world — things appear in a more amusing light. It helps tell the stories in a unique way, where I wouldn’t be able to suspend my disbelief nearly as much if he were simply a human man.

I first became interested in Hellboy from watching the film, and though it has its own charm and Ron Pearlman did a good job in the role, it is very underwhelming when compared with the comic books. While I understand why it did so, it went for the fish-out-of-water story with Hellboy, making him more juvenile and concerned with being in the outside world and having a girlfriend. The more mature take on the character found in the comics was preferable to me.

What became especially apparent to me about the character in The Right Hand of Doom is how important the status quo is to him and the overarching storyline. The focus isn’t on him fitting in because he already does, and that’s the real problem. He was born to bring about the end of the world, but he outright refuses this destiny. It becomes more and more obvious, however, that there are powerful forces at play that he cannot simply ignore forever. 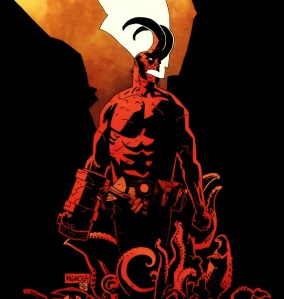 That is, incidentally, a lot of what Hellboy is doing in one-shot stories and miniseries; avoiding the problem. It’s a problem so big the character can’t really fight it head on, so he does a relatable human thing and tries to ignore the problem, hoping it will go away. I find this to be a very interesting and unique approach to more episodic storytelling. I felt a little like it was distracting things from the bigger picture, but that’s kind of the whole point, and I found I had great appreciation for that. It gives a real narrative reason for why the series isn’t following a singular plotline.

Hellboy stands out very prominently for me as a unique example of comic book storytelling, and I am eager to continue the series, as well as get into spin-off series like B.R.P.D.

One thought on “The Haunting Simplicity of Hellboy”