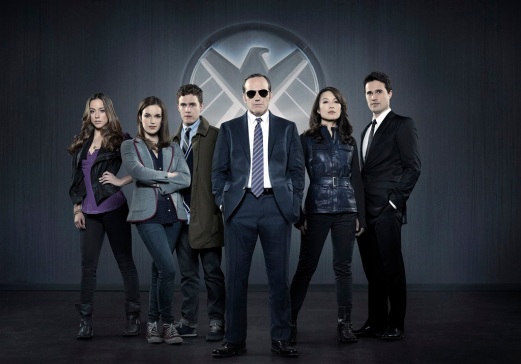 Although I’m a big fan of the Marvel films and the new Daredevil series, I’m only just getting started watching the ABC television series Agents of S.H.I.E.L.D., which began in September 2013. The series specifically takes place after the first Avengers film, following recurring Marvel Cinematic Universe (MCU) character Agent Phil Coulson (Clark Gregg) and his new hand-picked team of agents. They respond to/investigate superhumans and related anomalous objects on the behalf of the titular peacekeeping spy agency. While I have only watched five episodes so far, I have some first impressions on the series I thought I’d share, especially since the closing of the fifth episode marks a bit of a turning point for me.

Firstly, I like how the series is shows more about the effects of a growing superhero world on the lives of everyday people. After the events of The Avengers superheroes are public knowledge, and even in the five episodes I’ve seen there have been a couple of examples of the idea of superheroes affecting everyday people who are changed by related phenomenon. 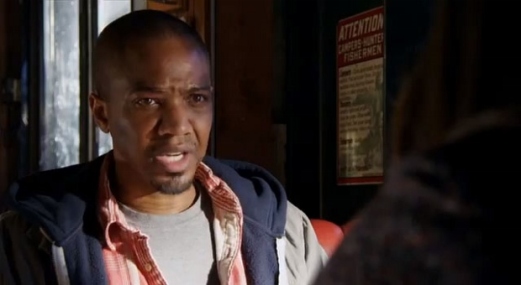 In the first episode we are introduced to Mike Peterson, a factory worker who is having an injury treated by a serum containing Extremis (from Iron Man 3) that gives him superhuman abilities, but it is still highly unstable. He begins to see his situation as the beginnings of a superhero career, when in reality he is in volatile condition and a little emotionally unstable.

I like how the series is starting to establish a superhero universe where it doesn’t always work out; freak experiments don’t always result in a workable superhuman, and most people aren’t actually cut out for those kinds of heroics. In the case of Peterson we see that his unlucky lot in life misguides him to lash out at the wrong people. Although his intentions are good, the serum is warping him and it showcases the dangers of super powers and the necessity of an organization like S.H.I.E.L.D.

While I’ve found the cases to be interesting for the most part, what I have found to be below average in quality is the cast of characters we are treated to. I like Coulson well enough thanks to his previous roles in the MCU, but I’ve yet to see it proven that he can really carry a team like this. For now, I’m not entirely convinced, though I know the show expects me to be. Agent Ward (Brett Dalton) is interesting, it being fairly well established that he is normally a solo operative now needing to work with a team, and it has been decently shown that he is outside of his comfort zone.

The remainder of the team, however, I am lukewarm about at best. Melinda May (Ming-Na Wen) is cool as a concept — a more experienced operative who is well-respected and even a little feared — but so little has been done with her as a character so far that she’s been rather bland. Fitz (Iain De Caestecker) and Simmons (Elizabeth Henstridge), the team’s engineer and scientist respectively, I have a hard time believing as characters. I feel I understand what the creators were going for when writing them — quirky yet passionate scientists, both comic relief yet brilliant — but they are so overwritten/overplayed in these roles that I cannot take them seriously. So far they have followed their familiar archetypes so closely that they’re indistinguishable as characters, except for the fact that Fitz is a man and Simmons is a woman. I’m not saying that a pair of characters like these could never work (or even that they will never work), but as it stands they don’t have enough substance to them for me to care about them. 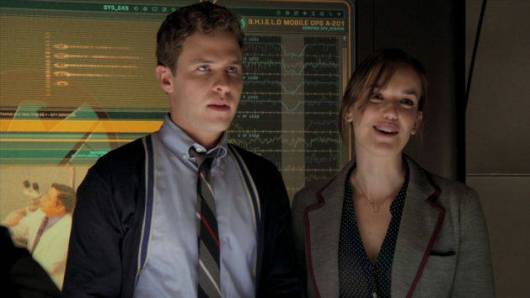 Skye had been the worst offender for me as a character, and a lot of this had to do with the fact that she is the character most meant to be a stand-in for the audience. Everyone else on the team knows how S.H.I.E.L.D. operates, but Skye is a “hacktivist” who has been working against the organization for a long time, before Coulson brings her on as a consultant after the events of the first episode. I found her sarcastic and clever attitude more grating than charming, however, as her motivations were vague, stakes were high, yet she never took anything seriously. The show tries too much to have a light/quick-witted tone at times, and I feel Skye has been the focal point of this problem.

This tone that has been present throughout the series so far has made it difficult for me to get invested in what’s happening. I don’t believe the entire team is actually competent enough to succeed in the cases they have without a greater force backing them up. It feels more like they’re students on a field trip than professional field operatives dealing with sensitive information and dangerous phenomenon. 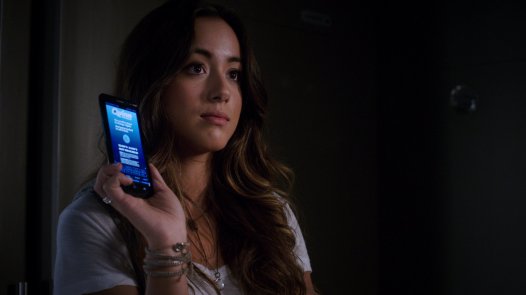 A change in the winds took place for me by the end of episode five, however, when we are finally clued in to Skye’s motivations. At first it looked very much like they were playing up her “hacktivist” role, getting on the inside to do something or other, which I never saw myself getting behind in the context of the show. I was happy to see, without giving it away, that they gave her a motivation and drive that was more relatable.

Many sources I’ve heard from have said the series gets a lot better as it progresses, so I’m definitely going to stick it out and see it through. Despite this I also understand now why a lot of people were lukewarm about it in the beginning. I hope quality starts to pick up sooner rather than later, since this season is over twenty episodes long.