Well, it’s been another month and I’m happy to say I actually wrote the my first Writing Report post before I put another one of these out. It has gotten me writing more frequently, though not for the extended periods I have wanted yet. Some personal and work related matters needed tending to, which made it harder to focus on writing. My deadline is for the end of March, which I may not hit, but I’m planning to get a lot of it done Saturday, with the hope that within the first week of April I will hit my goal of a completed first draft. 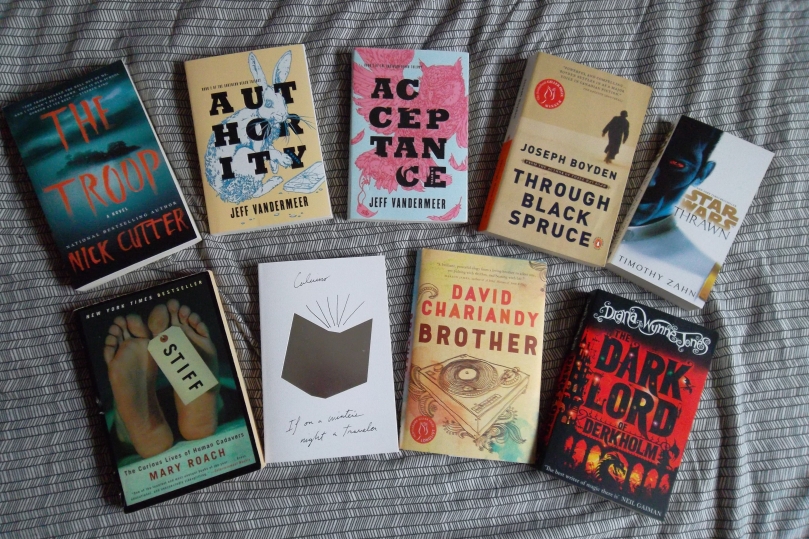 March may not have been a good month for finishing books, but I managed some great finds!

Through Black Spruce by Joseph Boyden and Stiff by Mary Roach I found at a local thrift store. They were both in really good condition, which made them irresistable. I wasn’t intending to pick up Stiff after reading Spook last month, but I enjoyed her writing so I’m happy to read her again. I loved Three Day Road, which Through Black Spruce is kind of a sequel too (I think). Either way I love his writing and have been meaning to pick that book up for a long time. I want to read more Canadian literature.

The Troop is a book I’ve been wanting to check out for a while too. I’ve never read any “Nick Cutter,” but that is the pseudonym of author Craig Davidson, whose fiction I have enjoyed a lot. Cutter is apparently the name he uses when publishing horror and I’d really like to see his writing chops with the genre.

The Dark Lord of Derkholm by Dianna Wynne Jones is one that surprised me. I only happened to check its availability, which is usually spotty, and saw that there was one copy available on the Indigo website for $9. I’ve been wanting to read more Jones lately and pounced on this book before it sold out.

After watching Annihilation near to the beginning of the month I felt compelled to pick up the second and third books in the Southern Reach trilogy—Authority and Acceptance— which were decently affordable. I’m a lot more interested in reading through them all soon since seeing the film.

I was originally not interested in picking up Thrawn by Timothy Zahn, but I was far enough along in the series Star Wars Rebels that reading about the character became interesting enough to me. It helps that it’s written by the character’s creator. Another Star Wars book on the pile, I guess!

If on a winter’s night a traveler by Italo Calvino is a book I want to read because I remember it sounding strange, with many layers and stories within the story. When I first added it to my TBR I knew a bit more about it, but I’m happy I’ve largely forgotten. I really want to go into it not knowing what to expect.

Lastly, Brother by David Chariandy is a novel I won at a book discussion mixer organized by my local library. On the last Wednesday of every month people are free to meet up, grab drinks, and discuss a predetermined theme relating to books. At the end of the night they hold a raffle and I happened to win this book. I didn’t know anything about it before I got it, but I will definitely read it. 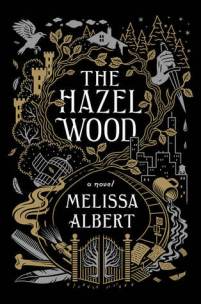 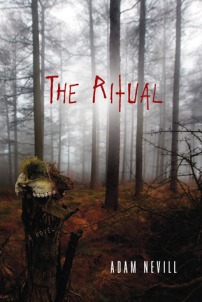 Three of these first four I became aware of thanks to the WWW Wednesday posts of bloggers I’ve been reading. Sleeping Giants is part of a science fiction series told through interviews. The premise and format really intrigued me, and apparently they’re rather quick reads.

The Beginning of the World in the Middle of the Night is a collection of “modern fairy tales,” which I love the idea of. On top of that they sound weird in a way that really appeals to me.

The Hazel Wood is a novel I repeatedly see others reading, so I added it pretty much on those grounds alone.

The Ritual I’m only really interested in because I thought the movie was good. I saw a particularly scathing review on Goodreads that makes me wary, but I may check it out anyway. Probably through a library if possible, instead of buying. 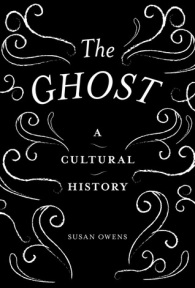 I became aware of Roadside Picnic as I did some light research on the film adaptation of Annihilation. Apparently aspects of these stories are very similar to each other, though this book came out long before Jeff VanderMeer’s book. While some use that as a point of criticism, I’m simply interested in reading another twist on that type of story.

The Works of Arthur Machen I shelved because I’m a little fascinated with the author as an influence on H.P. Lovecraft, horror, and “weird tales.” I want to read a lot more of his stuff, so anytime a collection comes to my attention I shelve it.

I came across The Ghost at a local bookstore. I don’t know if I actually want to pick it up, but the idea of a book examining the cultural history of ghosts and what they mean to different societies and time periods is right up my alley.

The Seven Deaths of Evelyn Hardcastle is another book that came to me through other blogs. It’s about someone trying to solve a murder while caught in a time loop, doomed to repeat the sequence of events until they can stop it. Sounds marvelous. 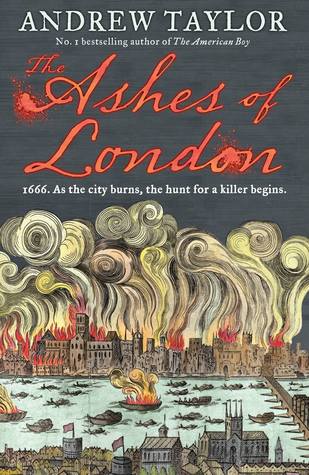 The Amazing Screw-On Head I added to my TBR because it is Mike Mignola and I’m fixated on his work. It’s also low commitment, not another long running series with numerous volumes, so I’d like to pick this up sooner rather than later.

The Ashes of London I came across just the other day in a WWW post. I like the idea of a blend of history and mystery, so I want to check it out. The cover is also quite striking, which can be a weakness of mine. Can’t really help that. Look at it though. That’s lovely, right?

So, that’s everything for this month. Have I acquired and TBR’d more books than usual as a way to compensate for my lack-luster list of books finished? I hope this wasn’t too much of a dump of info, regardless. Hopefully you find something you want to read among all of these too. They all look pretty awesome to me.

Not only did I only finish start and finish one novel this month, I also only read one comic book volume. I find I hold myself back from reading too many because I don’t want my reading challenge for the year to be full of them, but I really need to break that mindset. They may not be as long, but I do respect the medium as a method of storytelling. Maybe I’m just worried others will judge. Anybody else feel this way sometimes?