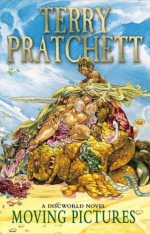 Over the weekend I finally started reading Moving Pictures by Terry Pratchett, the tenth Discworld novel. This is another book in the series that follows a new cast of characters, parodying a specific concept in its own Discworld-y fashion. This time around it’s Hollywood (“Holy Wood”) and the film industry, which has made its way onto the Disc in a roundabout, fantasy sort of way. The protagonist is not particularly remarkable so far, but I really like the notion that something Lovecraftian is at play giving people “Holy Wood dreams.”

Saturday morning I finished reading Journey to the Centre of the Earth by Jules Verne. Check out my full review here. I liked it well enough, but it ended rather abruptly when the real sense of adventure and discovery had finally started taking off for me. There’s only so long that characters can wander deep underground, perilous though that can be, before it becomes played out. I can respect the book for trying to be as scientific as possible in dealing with the seemingly impossible things the characters do come across, but I wanted them to more directly confront the more startling discoveries they did make. 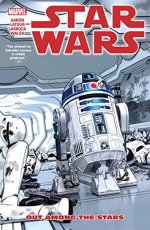 I also read Out Among the Stars by Jason Aaron et al, the sixth volume in the current Marvel Comics run of Star Wars. I rather liked this volume, despite its focus on the core crew of the Millennium Falcon (which hasn’t been stellar in this series as of late). Each issue of this volume was dedicated to different pairings of characters, telling brief self-contained stories that had some well done little character moments. One chapter followed the SCAR squadron of elite Stormtroopers, a perspective I especially enjoyed in this book. The RD-D2 story was a little silly. I have trouble with the little astromech running circles around supposedly trained soldiers, but it’s not too big of a bugbear for me.

Ottessa Moshfegh’s new novel My Year of Rest and Relaxation should be arriving any day now, so I’ve decided to get the jump on that net while it’s newly published. The only thing I know about it in a roundabout sort of way is that it deals with feelings of apathy and depression in an otherwise privileged life. I really enjoyed her last book, so I’m really looking forward to checking this one out.