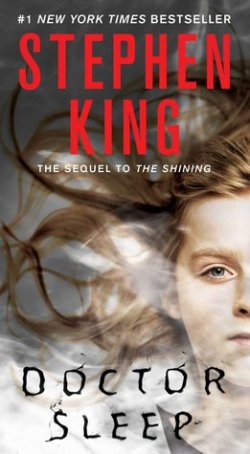 Kicking off my Frighteningly Good Reads for 2019 is Doctor Sleep by Stephen King, the 2013 sequel to one of the author’s most famous novels, The Shining. Dan Torrance, now a grown man, is still haunted by his experiences at the Overlook Hotel all those years ago. Some ghosts are harder to escape than others, and the violence and drinking that plagued his father has come back around on him, leaving him to aimlessly wander around the country. He eventually winds up in Frazier, New Hampshire, a small town that inexplicably triggers visions, despite the years of drinking dulling his “shine.”

Dan decides to settle in the town and gets his act together, attending AA meetings and eventually working at a hospice where he uses his psychic gifts to comfort those passing on, gaining the nickname “Doctor Sleep.” One day he is remotely contacted by Abra Stone, a young teen girl with a “shine” far more powerful than his own. She has attracted the attention of the True Knot, a tribe of psychic vampires who feed off of victims with powers like theirs, and needs his help if she is going to survive.

Though I was spurred to read my copy by the upcoming release of the film adaptation, a sequel to The Shining was undeniably tantalizing. With Danny so young in the first novel, I really wanted to know how his life had carried on from such traumatic experiences. In this respect, I found this novel very satisfying. Dan is an exceptionally well realized character who has a lot of issues from the outset that he needs to overcome. Some of these are a little fast-tracked, as certain sections of the story take place years apart from each other, but nothing felt unearned. His alcoholism is a continually nagging presence, despite his sobriety, not something he simply gets over.

I really enjoyed seeing him fill the same type of role for Abra that Dick Halloran did for him. The two of them establish a nice rapport; even without any direct threats for the two of them to face I enjoyed just reading about them interacting with one another. She’s much more powerful than him, but he’s a wellspring of life experience that offers a more level-headed look at the challenges they face, advising her on how to use her powers most effectively. I do wish she had needed more overt guidance on how to rein in her abilities in general, however. Other than a few instances, Abra has a competent handle on them and only really needs Dan for advisement, rather than learning actual control. The threat ghosts can pose is established early on, for instance, and I would have liked it if a chapter had him teaching her how to deal with otherworldly presences like these. Instead, it doesn’t ever really become an issue.

Exacerbating things further is the True Knot, the villainous force that brings Dan and Abra together. The most I can say in their favour is that the threat they pose is credible. I understand how and why the characters needed to act against them, but goodness, they almost never felt threatening or scary. It’s ironic that they refer to normal human beings as “rubes,” because they never failed to come across as a bunch backroads rubes to me, even their more formidable leader Rose the Hat. I imagine this was partly intended—that they have an inflated sense of self-importance—but I was rarely worried for our main cast of characters. They were kind of a joke; constantly thwarted, easily outsmarted, and just as susceptible to violence as a normal human being.

A significant factor in the story is their group contracting measles from one of their victims—catching a human disease being inexplicable even to them—which served to make them more desperate. I could understand the storytelling reasons to compromise them a little, but I never got a satisfying explanation for why this happened now and not any other time before. They’re also so inept at dealing with people who put up any sort of resistance, as I’ve said, so this facet of the story felt largely unnecessary. It did serve to set up something crucial during the climax, but I felt that made things a little too easy for the main characters anyway, so I could have done without it.

Doctor Sleep is a decent follow-up to The Shining, especially if your interest lies in catching back up with Danny and seeing how he turned out. The character related parts of the story are quite compelling, with some twists and turns along the way that helped to keep things surprising. If you’re looking for something scary, however, this novel will likely disappoint you. The True Knot had potential, but they’re largely incompetent and vastly overshadowed by the ghosts that haunted Dan’s childhood. King is great at crafting endearing characters and they’re the reason why I still like this book despite my problems with it.