Tremor Dose is a horror graphic novel written by Michael Conrad and illustrated by Noah Bailey, and my second Frighteningly Good Read for this year. Ginn Morris is a young college student who has been suffering from bizarre and disturbing nightmares. Each is different, with one strange thing in common: a man she does not know keeps appearing in all of them. Having spotted a flier on campus with the man’s face on it that asks “Have You Dreamed This Man?” she contacts the number attached. What begins as an interview dissecting her dreams and her experiences with the man therein eventually spirals down a rabbit hole that leads her to question her very understanding of reality.

I’d been really interested in checking out this comic book for a while, the reason being its incorporation of the “This Man” hoax. The fliers asking “Have You Dreamed This Man?” were apparently real at one point and the supposed mystery around them circulates online to this day. It was of course eventually revealed that they were a part of an elaborate marketing stunt, but the man’s uncanny facial features and the ominous question posed by the flier are just so creepy that it sticks in the mind. Having a graphic novel expand upon the idea projected by these fliers was so compelling to me and I was eager to see what the authors came up with. 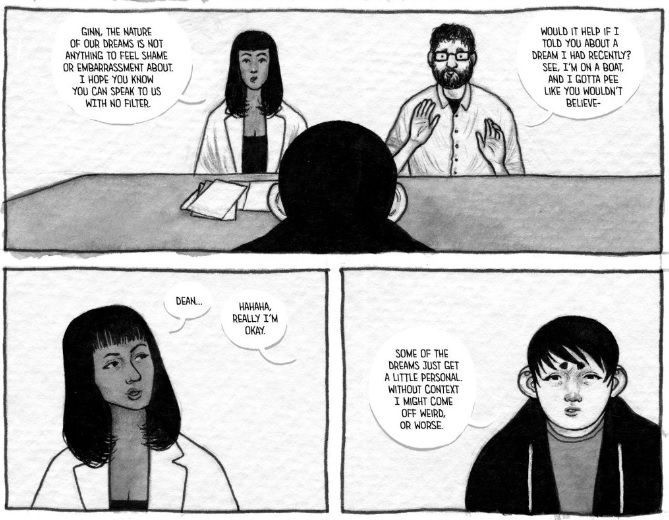 This graphic novel is divided into two parts, which is significant to me because I have rather differing opinions of each half, making my feelings on the whole of it a little harder to quantify. Part One is largely about Ginn describing her dreams to two interviewers, and what I found remarkable about it from the get-go was the immediate sense of unease it created in me. From the hop I got the feeling that something more was going on, but I couldn’t put my finger on it yet. We get much of the context from dialogue spoken by the two interviewers prior to Ginn’s arrival, who behave notably different when talking to each other versus talking with Ginn, to great effect.

It is in Part One that the book spent the most time with wildly different dreams, though most of them dark or grotesque in some way. This is where Bailey’s rather unique art, which balances on a razor’s edge between realistic and abstract, really shines. It did a great job of vividly presenting surreal, illogical, and even upsetting imagery in the ways that only dreams/nightmares can. The clues to the mystery slowly unfurling in this part of the story are embedded in each dream too, in a way that was both obvious and yet not immediately apparent. 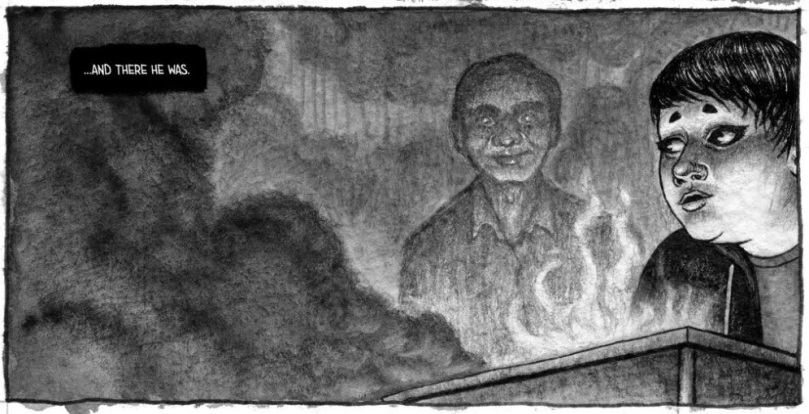 It was this gradually revealed mystery that made me love this first part of the book so much. Once the story started more obviously tipping its hand, I was compelled to look back on the dreams I’d already read as the truth started to dawn on me. The nature of the Dream Man is explained by the end of this part too, and while the situation is perhaps more mundane than at first implied, I loved the modernist nightmare that came into view. Fiction about dreams can often become too nebulous for their own good, so I was grateful for a more concrete premise for the story to stand on. My enthusiasm for what the story built toward here was undermined by Part Two.

With the truth unveiled by the end of the first half, Part Two has Ginn becoming a more active part of what is really going. I will be scant on the details, since the book isn’t long and others may find it worth puzzling out, but Part Two took things in a direction I did not like. It’s a direction many stories about dreams take: obfuscating where dreaming ends and reality begins. We are treated to many more visually interesting components of dreams, a credit to the artist, but as twist upon twist was introduced and the line between dream and reality became blurrier and blurrier, I stopped caring. The story seemed more interested in frustrating my understanding than telling something more coherent. It’s clear by the end that the situation is not resolved either, but I’m not sure I could say what the crux of it all actually was.

Within the afterword there is tantalizing note from the writer, asserting that all questions raised by the narrative can be answered within the book itself. If true, I applaud the attention to detail he would have to have put in to make that work. While going back over the book more than once is legitimately tempting, I also struggle to be invested enough for that. It feels more like it’d be a chore for me than an exercise I would find fulfilling, so I can’t help but consider it a knock against the book that I am not satisfied with how it concludes after just one reading.

Tremor Dose is not a bad graphic novel, but I cannot personally rate it higher because it frustrated me too much, regardless of how much I liked the first part of it. The art is wonderfully unique and well-suited to the story being told, however, so in that respect it’s worth checking out as something unconventional in the sphere of comic books. Your mileage may vary with the book as well: I became frustrated with the many twists the story took in the latter half, but I can see how others may find themselves more drawn to working out its more puzzling elements.