Though we’re well into January now, I’ve felt a little less motivated to get my new challenges put together for 2022, which is why this post is going up so late. Nevertheless, I like taking this time to look back at the year that has passed and look forward to what I want to read in the coming year. I hope to be able to keep most challenges relatively the same, but with the second job I’ve been doing since August, I feel like my goals are incidentally more ambitious.

Unfortunately, in 2021 I came up one book short of my Goodreads challenge with 54 out of 55 books. I could have completed it had I planned my reading time in December better, but things just didn’t work out that way. I blitzed through reading several books over the last few days of the year, but on New Year’s Eve I simply didn’t have enough time to complete one more.

The split between prose/text-only books and comic books was 25 for the former and 29 for the latter, which is almost exactly what the split was in 2020. Interesting that, despite the second job, I finished the exact same amount of books in 2021 as 2020. Perhaps it’s not the hindrance that I think it is.

Nevertheless, for 2022 I’ve slackened this challenge a little by giving myself a challenge of a nice even 50 books, since I have every intention of keeping this second job for the foreseeable future. I’m not really reducing any of my other more specific challenges either, so I’d rather this one take a bit of a hit.

If you’d like to check out the entire spread of books I logged on Goodreads in 2021, you can check them out here.

Every year I like to compile a list of books to read on a scrappy piece of paper. I just like to cross them out. For the first time ever, in 2021, I finally completed one of these lists!

Let’s see a before and after:

Since my last update, I finished reading The Grip of It by Jac Jemc, ‘Salem’s Lot by Stephen King, A Gathering of Ghosts by Karen Maitland, and The Complete Cosmicomics by Italo Calvino.

Though the list was smaller than previous years, I’m happy I completed all 12 of the selected books. I really enjoyed the new conceit for these lists too, that they must be new standalone books or the first book in a series, nothing from a series I’m already in the middle of reading.

For 2022, I’ve decided to follow these new rules once again. I have selected 12 new books, and none of them are directly connected to any series I’m going through. Let’s have a look, shall we? 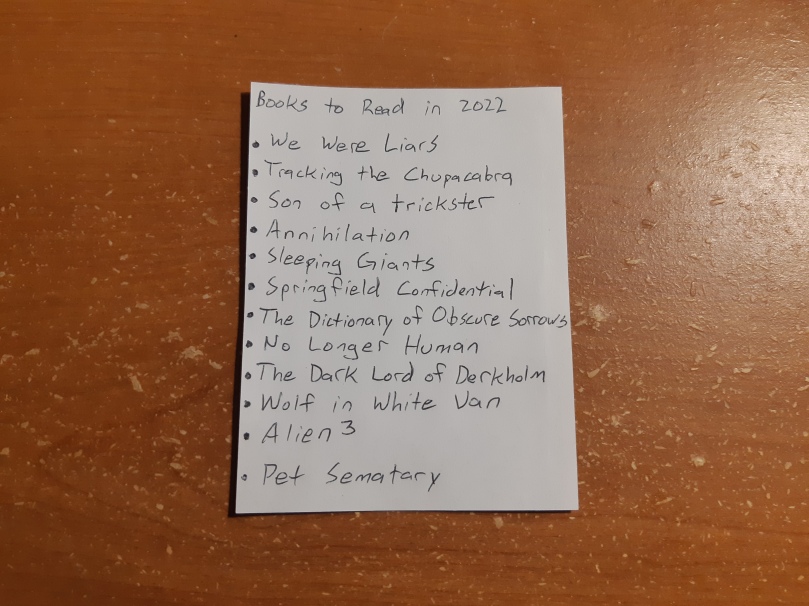 I really enjoyed doing this smaller challenge last year too, though I came up a little short. For the first part, where I endeavored to read four Discworld novels by Terry Pratchett, I failed to get to the fourth. I read Feet of Clay, Hogfather, and Jingo but didn’t manage to start, let alone finish, The Last Continent.

For this year, I will be reading another four, starting with the one I missed last year. I will just take the loss and move forward, rather than try to compensate with five this year. Hopefully, I will read one of these every quarter this year.

The same as the last group, I will be carrying forward the odd book out to go along with three new books from series I want to stay on top of.

I was looser with when I wanted to read these last year, at least initially, but I think I want to try to get to one of these each quarter too. I’ve actually already started Thrawn: Treason as well, so I’m off to a good start with these.

I’d like to say I have plans to pick writing back up in a meaningful way, but I’m so much more busy than normal that it’s effectively dead in the water at the moment. So it goes. I still want to be more creative, generally speaking, and I do have ideas floating around in my head, but I can’t make any promises right now.

What are your reading plans for 2022? I’d love to hear about them.